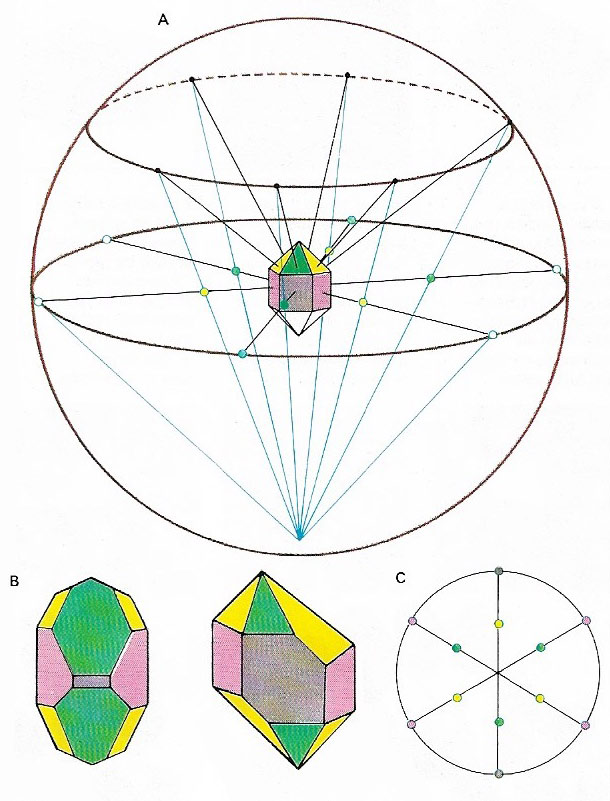 Fig 1. Stereographic projection represents a three-dimensional crystal as a two-dimensional figure. The mathematics are quite complex but in theory the crystal is placed at the center of a sphere and lines drawn from the center, perpendicular to each face, are extended to the surface of the sphere (A). The points so produced at the equator of the sphere and over the northern hemisphere are then connected to the south pole. The points at which these connecting lines cut the equatorial plane form a pattern. The pattern is the stereographic projection of the crystal (C). In any crystal, the angles between the corresponding faces are always equal no matter how distorted the crystal may be, and so the stereographic projection will always be the same. Hence the two distorted crystals of quartz (B), despite the differences in size of their corresponding faces, will produce the same projection. 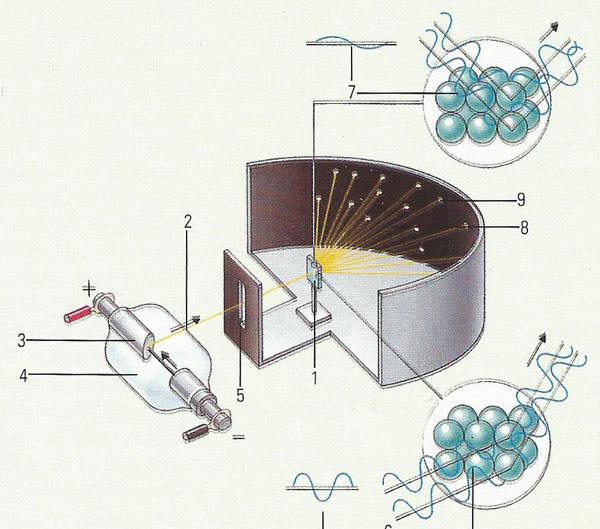 Fig 2. X-ray crystallography allows the details of the structure to be recording by bombarding a crystal sample (1) with a beams of X-rays (2). The X-rays are created by bombarding a tungsten anode (3) with electrons in a vacuum (4). A slit (5) focusses the X-rays on the crystal. The distance between the atomic planes in the crystal either reinforces (6) or cancels out (7) the X-rays. When the ray is reinforced the emerging X-ray (8) creates a spot (9) on photographic film. The pattern of the spots can be used to deduce the exact structure of molecules.

The science of crystallography began when the Danish geologist and anatomist Nicolaus Steno (1638–1686) discovered in 1699 that the angles between faces in different quartz crystals are constant. In 1783, the Frenchman Jean-Baptiste Louis Romé de l'Isle (1736–1790) established that the angles between the faces of a crystal are characteristic of the substance of which it is formed. Another Frenchman, the abbot René Just Haüy (1743–1822) explained that the angles between the faces are constant because a crystal is composed of tiny identical blocks of substance (known today as unit cells) packed together in a regular array. He also described the seven basic crystal systems and the principles of their symmetry.

In 1912, crystallography became an important branch of science with the discovery by the German physicist Max von Laue (1879–1960) that the internal structure of crystals could be revealed by X-ray diffraction. The principles of this method were largely developed by William Henry Bragg (1862–1942), a Briton, and his Australian son William Lawrence (1890–1971).

X-ray crystallography (Fig 2) is the study of crystal structure by means of X-ray diffraction. Each substance has a different crystalline structure. The atoms, molecules, or ions in a far too small to affect a beam of light. X-rays, however, have a shorter wavelength than visible light and diffracted by the lattice.