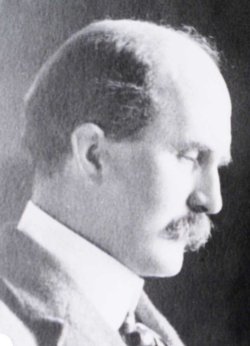 William Henry Bragg was a British physicist who shared the 1915 Nobel Prize in Physics with his son, William Lawrence Bragg (1890–1971), for their analysis of X-ray spectra and the structure of crystals. He was knighted in 1920.

A crystal is a substance consisting of a regular arrangement of atoms or molecules. In 1911 a German scientist, Max von Laue, discovered that when a narrow beam of X-rays falls on a crystal it is scattered as a regular pattern of diffracted beams. As the X-rays sweep through the crystal, the atoms scatter them, and these diffracted beams appear in directions where the scattered waves from all the atoms add their effects together (see X-ray diffraction). By studying this effect it is possible to find out how the atoms are arranged in the crystal.

W. L. Bragg, then a student at Cambridge University, first used von Laue's complex method to work out the structure of common salt, sodium chloride (NaCl). W. H. Bragg then devised a far more powerful and simple instrument, the X-ray spectrometer, which made it possible to investigate more complex structures, such as that of diamond.