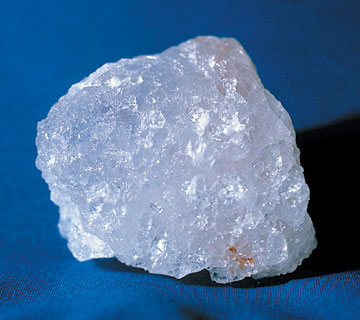 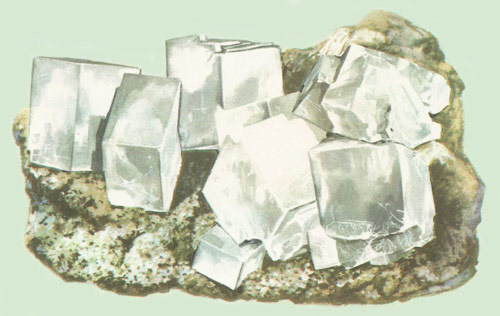 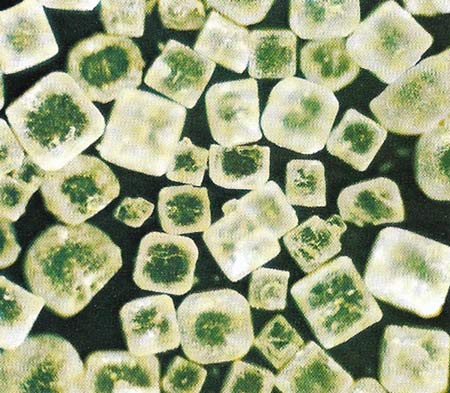 Fig 5. Seen through a microscope, crystals of table salt are revealed as tiny cubes. 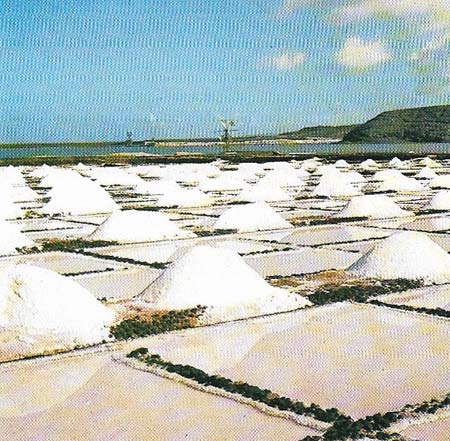 Fig 6. Salt has been extracted from seawater since the days of the Minoan civilization. Seawater is first trapped in coastal pans. As the water evaporates in the sun, the salt is precipitated from the brine.

Sodium chloride (NaCl) is a colorless crystalline compound, also known as common salt, table salt, or simply, salt (although, in chemical usage, the term salt has a much broader meaning). Sodium chloride occurs in seawater and natural brines (along with other salts of sodium, calcium, magnesium, and other light metals) and as the mineral halite (rock salt). It is used in the manufacture of other chemicals (e.g., sodium carbonate, NACO3, in the Solvay process, sodium hydroxide, NaOH, in the Castner-Kellner process, and chlorine) and as a de-icer on roads. It is also used the world over as a food preservative and seasoning.

Salt has been used for thousands of years to preserve food (especially meat and fish). In Roman society, salt was used as currency, and soldiers were paid in salt. The Latin sal is the root for the English word "salary" and the phrase that a person is "worth their salt" means they are worth what they earn.

When seawater evaporates in a closed lagoon, halite and other minerals precipitate out and sink to the bottom as crystals. In this way, great beds of rock salt have been formed. When sediments containing rock salt are folded and uplifted, the beds of rock salt are exposed, and in time they dissolve away, forming brines which either percolate into the ground or the ocean, or collect in salt lakes.

Salt can be mined from halite either by traditional mining practices using heavy equipment underground, or by pumping hot water in pipes into the salt deposit, where the hot water dissolves the halite. The resulting salt water is then pumped to surface and evaporated to yield salt, a process known as solution mining. In some modern dry salt lakes, a crust of halite can be recovered by simply scraping the salt crust off the lake bottom with bulldozers or scrapers.

Much salt is produced by controlled evaporation of seawater or of brines in salt lakes. In this technique, the water is pumped or drained into shallow ponds. Solar evaporation will eventually (in an arid climate) concentrate the salt to the point where it crystallizes on the floor of the pond (Fig 6).

Salt is produced in many countries. The leading producers are the United States, China, Germany, India, and Canada.

Halite, also known as rock salt, is naturally occurring sodium chloride (common salt, NaCl) crystallizing in the cubic (isometric) system (Fig 3 and 4). It is colorless or white (sometimes blue) when pure but may be colored pink, red, gray, or brown by the presence of impurities. It is found in evaporite sedimentary rocks, often found in association with gypsum and anhydrite, in salt domes and dried lakes. Halite was named by E. F. Glocker in 1847 after the Greek hals, meaning 'salt'. Hardness 2.5; relative density 2.2.

Sodium chloride has a key role in biological systems in maintaining electrolyte balances. However, when ingested in excess, as often happens in the developed world, it can lead to high blood pressure (hypertension).

Many microorganisms cannot live in an overly salty environment. Notable exceptions are halophiles which thrive in places such as salt flats that are highly saline.

In the Star Trek original series episode "The Man Trap" appears a creature, the last of its kind on the planet M-113, that requires large quantities of sodium chloride to live. When the planet's salt supply ran out, the creature (known colloquially to Star Trek fans as the "salt vampire") turned to other animals, including visiting humans, for its sustenance. The M-113 creature uses its shape-shifting ability to lure its victims before attacking them.