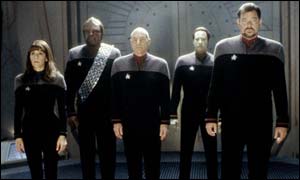 Star Trek was a three-season TV series (1966-69) about the adventures of the superluminal starship Enterprise and her crew which eventually spawned a number of motion pictures and four derivative series – Star Trek: The Next Generation, Star Trek: Deep Space Nine, Star Trek: Voyager, and Enterprise. These spin-offs were set in the same "universe" but about 80 years further in the future in the case of DS9 and Voyager, and prior to the events of the original series in the case of Enterprise. The need for interesting plots demands that inhabited planets abound. But although a variety of unusual extraterrestrials have appeared on Star Trek over the years, including cyborgs, silicon-based life-forms, and noncorporeal life-forms, the stock alien is basically human with a modified forehead or nose (see anthropomorphism).

Star Trek began life as a pilot for the NBC in 1964 as the space race between the US and the then USSR gathered momentum. Creator Gene Roddenberry's vision of a benevolent imperialism in the form of a federation of planets, and storylines based around exploration and discovery chimed with the age. The Cold War years were uncertain ones for many and Roddenberry's statement of hope for the future was comforting. But the first pilot, "The Cage," was never aired and it took another two years and a second pilot to convince NBC to commission a series. Star Trek was first broadcast on September 8, 1966 and lasted just three years before being cancelled, ironically in the year man first walked on the Moon. But the program refused to die: endless repeats, worldwide syndication and the growing phenomenon of Star Trek conventions kept the show alive in the minds of fans. A film and a new series were periodically discussed but never took off. It took the success of George Lucas' Star Wars to convince NBC executives that there was still money to be made out of science fiction.

In 1979 Star Trek: The Motion Picture was released, reprising the adventures of Captain Kirk, Spock, and friends. Despite costing a then enormous $35 million and boasting an overblown, pretentious plot it made $139 million world-wide, and launched the franchise. A second TV series became inevitable and Star Trek: The Next Generation was aired in 1987. Captain Kirk and crew continued to star in the films while Captain Jean Luc Picard took the helm in the TV series.

The 1990s marked a furious amount of Star Trek activity, with three different series on air – The Next Generation, Deep Space Nine and Voyager – and three movies made. In 1994 the original star of Star Trek Captain Kirk, played by William Shatner, was seen handing on the baton to Picard in the film Star Trek Generations. From that point on the crew of The Next Generation became the stars of the film series and the Star Trek franchise seemed to be powering to warp factor nine. But the endings of The Next Generation, Deep Space Nine, and Voyager, left the franchise without natural heirs. The TV series Enterprise, which was given a more soapy feel than previous Star Trek incarnations, failed to appeal to the mainstream in the manner the writers hoped for and, after four seasons, was cancelled. An eleventh Star Trek movie is, however, slated for release in 2008.