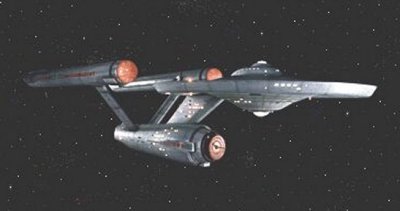 The Starship Enterprise is a fictional starship in the Star Trek universe. Its primary form of propulsion, known as warp drive, enables faster-than-light travel.

A Constitution class vessel launched in 2245, the Enterprise first appeared in the original Star Trek series with the designation NCC-1701. During its lifetime it underwent several upgrades, the most substantial taking place in 2270-73, when almost every major system was replaced, and the entire hull structure rebuilt from the ground up. The ship was destroyed in 2285 in orbit.

Pressure from Star Trek fans encouraged NASA to give the name "Enterprise" to the first flight-capable Space Shuttle. For more on this, see Space Shuttle Enterprise.

The Enterprise that appears in the original series of Star Trek is 289 m (947 ft) long, 127 m (417 ft) wide, and 190,000 tons in weight. It consists of three main sections: a saucer-shaped primary hull, a tapered cigar-shaped secondary hull, and a pair of engine nacelles.