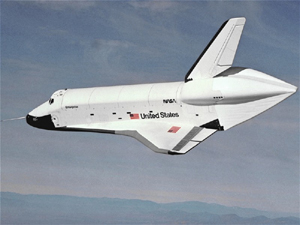 Enterprise was the first flight-capable version of the Space Shuttle Orbiter but one designed for ground and gliding tests only; its official designation is Orbiter OV-101. NASA had originally intended to call this vehicle Constitution in honor of several United States Navy vessels of the same name, including the "Old Ironsides" frigate launched in 1797 and now on display at the Boston Navy Yard. Constitution was also appropriate in view of the American Bicentennial, which was being commemorated at the time of factory rollout in 1976. However, Star Trek fans petitioned – sending 100,000 letters to the White House – to have the first Shuttle named after the famous fictional starship. NASA relented, and changed the name from Constitution to Enterprise prior to rollout, pointing out that several Navy vessels had also carried the name Enterprise, including the first nuclear-powered aircraft carrier.

During the summer of 1976, Enterprise underwent horizontal vibration tests at the Rockwell plant in Palmdale, California, designed to test the Shuttle structural integrity under simulated launch and landing conditions. Upon completion of these, it was outfitted to perform actual flight tests. But because the vehicle would never actually leave Earth's atmosphere, it differed markedly from its spacefaring successors. Enterprise had no main propulsion system plumbing, fuel lines, or tankage, and its main engines were only mock-ups. The payload bay contained no mounting hardware for cargo packages, and the payload bay door lacked the hydraulic mechanisms to allow it to open and close. In order to save money, thermal tiles were simulated using black and white polyurethane foam. The flight deck controls were much simpler than those required for spaceflight and the crew compartment was largely empty since only a pilot and commander would be aboard for the tests. A feature not included in operational Shuttles, however, was an ejection seat escape mechanism. Enterprise also carried a battery of equipment for making crucial aerodynamic measurements and, unlike future Shuttles was fitted with a long, pointed air data probe which stuck out from its nose.

Following the successful completion of the Approach and Landing Tests, NASA certified the Shuttle as aerodynamically sound and announced that no further flight tests would be necessary. But Enterprise was not immediately retired. Beginning in Mar 1978, a series of mated vertical vibration tests was carried out at Marshall Space Flight Center to subject Enterprise to a series of vibrations such as the Shuttle might experience in flight. Upon their conclusion, NASA had considered returning Enterprise to Rockwell to be upgraded into an operational Shuttle. However, as several major design changes had been made to the Shuttle while Enterprise was being built and tested, a refit was now considered too expensive. Instead, NASA opted to modify an already existing high-fidelity structural test article (STA-099) into what would become Challenger. As a result, Enterprise was taken to Kennedy Space Center (KSC) to test equipment and procedures that would be necessary to support the first Shuttle space flight. Engineers at KSC had been using a Shuttle mock-up nicknamed Pathfinder but Enterprise provided a much more realistic tool. Soon after its arrival at KSC, Enterprise was transported to the Vehicle Assembly Building (VAB), mated to an External Tank and inert set of Solid Rocket Boosters, and rolled out, in May 1979, to become the first Shuttle on the launch pad. For nearly three months, it supported operational tests there before being returned to the VAB for demating. In early August 1979 it was ferry flown to Vandenberg Air Force Base, then on to Edwards Air Force Base, and finally transported over land to Rockwell for removal and refurbishment of certain components for use on other Shuttles. Enterprise was then taken back to Edwards in Sep 1981 and put in storage for almost two years. In May 1983 it became the first Shuttle to travel abroad when it was ferry flown to France for the Paris Air Show. Eventually, it came back to Vandenberg for use in further validation of Shuttle procedures. In September 1985 it was ferry flown to KSC, to be put on display next to a Saturn V outside the VAB. Finally, on November 18, 1985, Enterprise was taken to its permanent home, a facility of the National Air and Space Museum at Dulles Airport in Washington, DC.