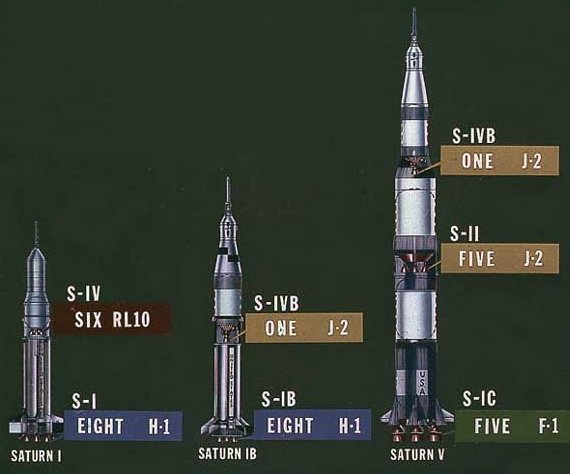 The Saturn family of rockets and the engines they used. Image: NASA. 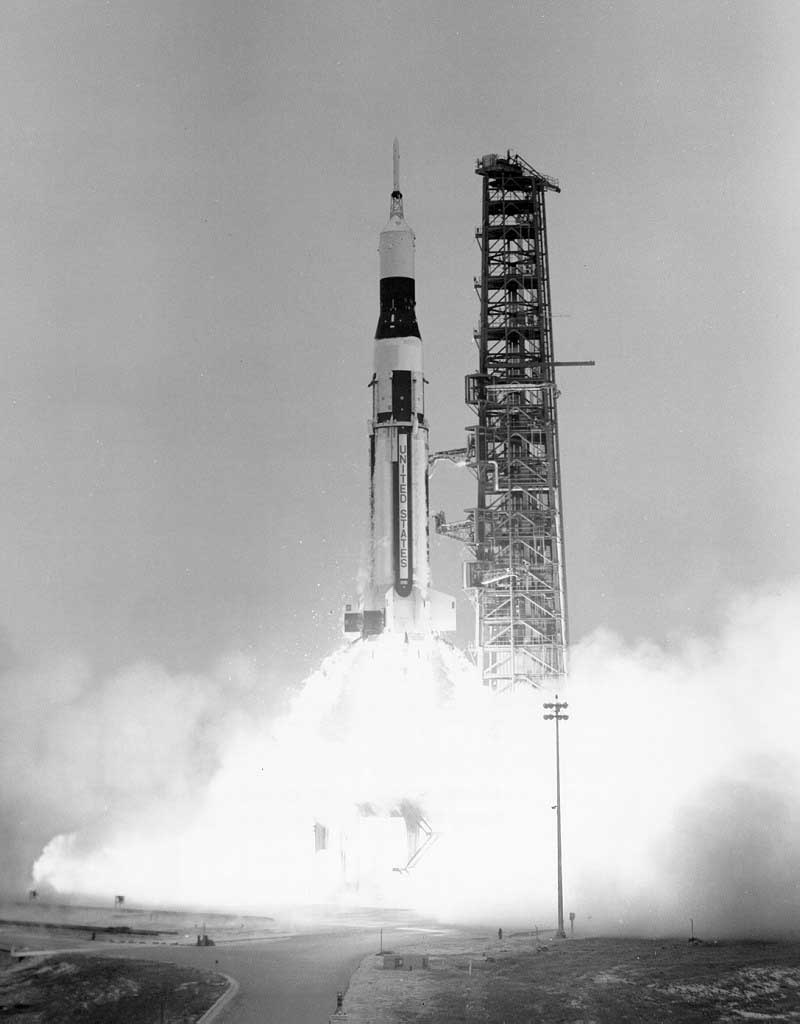 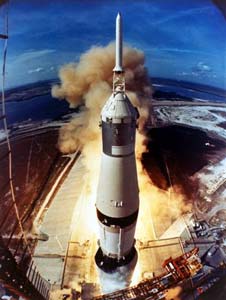 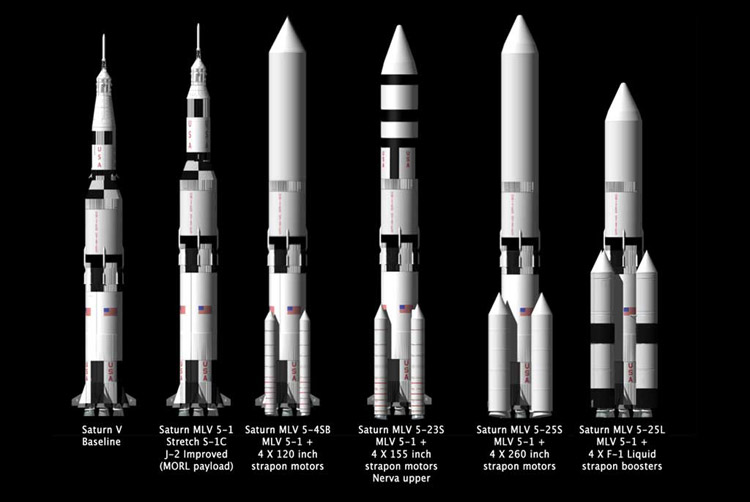 The Saturn launch vehicles were a family of large American liquid-fueled rockets that solved the problem of getting manned spacecraft to the Moon. They played a central role in the Apollo Project. Three models were developed: the Saturn I, the Saturn IB, and the Saturn V. In all, 32 Saturns were launched with no failures. NASA also considered various possibilities for upgrading the Saturn V.

The Saturn story began in 1957 when Wernher von Braun and his team at the Army Ballistic Missile Agency (ABMA) envisioned a heavy-lift rocket with a powerful first stage made up of a cluster of eight Redstone missile stages surrounding one Jupiter missile stage. Each of the clustered stages was to be fitted with a Rocketdyne engine adapted from the Thor missile program. In Aug 1958, the Advanced Research Projects Agency (ARPA) authorized ABMA to develop a rocket with a clustered first stage under the designation Juno V. Redstone-based Juno I and Jupiter-based Juno II rockets had already been successfully developed. Although concept vehicles known as Juno III and Juno IV were also under review at the time, they were never developed.

ARPA approved von Braun's suggestion that the Juno V be renamed Saturn since the rocket was dramatically different from the Jupiter-based Juno II and the planet Saturn is the next "step" beyond Jupiter. On October 21, 1959, the ABMA Development Operations Division, including the Saturn program and von Braun, was transferred to NASA – a logical move since the Army had no use for such a vehicle, whereas the newly-formed NASA had embarked on an ambitious manned spaceflight program aimed at a Moon landing. A government committee recommended that NASA consider three options, known as Saturn A, B, and C. The last of these was eventually selected and five versions of it, Saturn C-1 through C-5, ranging from the least powerful to the most powerful, proposed. Of these, only C-1 and C-5 were chosen for development. The Saturn C-1 was a two-stage vehicle that closely followed the design of the Juno V, while the three-stage C-5 was the giant vehicle that would take astronauts to the Moon.

Flight tests of the Saturn C-1 began in 1961 and involved two configurations called Block I and Block II. In the former, a live first stage was flown with a dummy second stage made up of an inert Jupiter shell ballasted with water. The first stage, known as the S-1, was made up of eight Redstone stages clustered around a single Jupiter stage. However, unlike the Juno V plans from which this design came, the Redstones served only as fuel tanks. Eight Rocketdyne H-1 engines were employed in the first stage – four in a tight square at the center of the rocket's base and four at the corners. Four of the Redstones and the Jupiter stage carried liquid oxygen (LOX); the remaining Redstones carried RP-1 (kerosene mixture).

The first four Saturn C-1s were launched in the Block I configuration to test flight dynamics and first stage reliability. The Saturn C-1 was renamed Saturn I in February 1963, prior to the vehicle's fourth test flight. (The "C" was also dropped from the other Saturn rockets, which became Saturn IB and Saturn V.) From the fifth Saturn I test launch on, the Block II configuration was used, featuring an operational first and second stage. The Saturn I second stage, called S-IV, was powered by a Pratt and Whitney engine fuelled by LOX and liquid hydrogen. In the Block II configuration, the Saturn I employed lengthened fuel tanks, improved H-1 engines with greater thrust, and eight stabilization fins on the first stage base.

The Saturn IB was an improved version of the Saturn I, introduced in 1966 to meet the growing demands of the Apollo program. The Saturn IB was a marriage of an uprated Saturn I first stage, called the S-IB, to a new second stage, known as the S-IVB. Using a more advanced engine design, Rocketdyne cut the weight of the first stage H-1 engine array while improving overall thrust. The second stage, which eventually formed the third stage of the Saturn V, used a single Rocketdyne J-2 engine fed with LOX and liquid hydrogen. Designed specifically for manned flight, the S-IVB carried three solid-propellant ullage motors and two auxiliary propulsion modules on its aft skirt. The ullage motors supplied positive acceleration between cutoff and separation of the first stage and ignition of the second stage, while the auxiliary engines were for on-orbit maneuvering. A 6.5-m ring fixed to the top of the S-IVB contained an Instrument Unit (IU) that handled all electronic commands for control and guidance during ascent. Saturn IBs used for manned flights carried a space capsule and launch escape system. Located at the top of the rocket, these components were attached to the IU by an adapter.

The fourth scheduled launch of an Apollo Saturn IB, with a vehicle and mission designation of AS-204, met with tragedy. AS-204 was planned as the first manned Apollo flight. Launch of the 14-day mission had been set for Feb 1967. During a countdown rehearsal at Launch Complex 34 on January 27, 1967, Virgil Grissom, Ed White, and Roger Chaffee were killed when their capsule caught fire. Granting honor and respect to the tragedy, NASA later changed the designation of mission AS-204 to Apollo 1. The Saturn IB that would have launched Apollo 1 carried instead an unmanned Lunar Module into low Earth orbit on January 22, 1968.

The Saturn V was the largest member of the Saturn family, developed at the Marshall Space Flight Center under the direction of Wernher von Braun. The three-stage Saturn V was taller than a 36-storey building and the largest, most powerful rocket ever successfully launched (see N-1); fifteen of them were built. Among the facilities specially constructed to accommodate this huge rocket were the Kennedy Space Center, including the Vehicle Assembly Building, the Saturn V crawler-transporter, and launch pads 39A and 39B. The Saturn V was flight-tested twice without a crew. The first manned Saturn V sent Apollo 8 into lunar orbit in December 1968. After two more missions to test the Lunar Module, a Saturn V launched Apollo 11 to the first manned landing on the Moon.

In a typical Saturn V Apollo flight, the five F-1 first stage engines were ignited 6 sec before liftoff. The center F-1 engine was shut down 135 sec after launch and the outer four F-1 engines 15 sec later. One second following cutoff of the four outer F-1 engines, the first stage separated. Simultaneously, eight retrorockets were fired briefly to slow the first stage and prevent it bumping into the second stage.

Following separation, the spent first stage fell into the Atlantic about 640 km downrange. One second after first stage separation, eight solid-fueled motors mounted on the first/second stage adapter ring were fired for 4 sec. As well as maintaining the positive motion of the rocket, this forced the second stage fuel to the bottom of its tanks in order to feed the engines – a so-called ullage maneuver – and was the cue for the five J-2 second stage engines to ignite. Thirty seconds later, the first/second stage adapter ring fell away, and 6 sec after that, the escape tower was jettisoned. The second stage engines burned for 365 sec before the next separation took place. Four solid-fueled retrorockets on the second stage fired to keep the second and third stages from colliding. Then the second stage began its drop into the Atlantic about 4,000 km from the launch site. At this point, the Saturn V was traveling about 25,300 km/h at an altitude of 185 km. Two solid-fueled motors on the third stage aft skirt were fired briefly to settle the fuel and simultaneously, the S-IVB third stage J-2 engine fired up for a burn of 142 sec. This initial S-IVB burn carried Apollo into a 190-km orbit at a speed of 28,200 km/h.

During two or three checkout orbits, the S-IVB attitude control motors could be fired in sequence to make any necessary on-orbit corrections. Following these checkout orbits, the ullage motors were fired for 77 sec to settle the fuel and provide forward spacecraft momentum. Then third stage J-2 engine reignited for 345 sec to achieve a speed of 40,000 km/h and place Apollo on a lunar trajectory. The third stage separated from the CSM/LM combination and the third stage ullage motors fired for 280 sec to move the S-IVB clear of Apollo. Finally, the J-2 engine fired for the last time, using up its remaining fuel, and, depending on the mission profile, sending the spent third stages either toward deep space or a collision with the Moon. These intentional lunar impacts were to enable seismometers placed on the lunar surface by previous Apollo missions to detect the resulting "moonquakes" and tell scientists about the Moon's internal structure.

Although a two-stage version of the Saturn V was used to place Skylab in orbit, the rocket was effectively retired at the end of the Apollo program. During its development, the Saturn V was expected to become a workhorse booster of a planned Apollo Applications space science program that would follow the lunar landing missions, but this program never materialized. In Dec 1976, NASA released components of two remaining vehicles along with test articles which eventually enabled the completion of three Saturn V displays.

During the Apollo program, NASA investigated a variety of options for uprating the Saturn V to carry heavier and more ambitious payloads. These included stretching the 1st stage in order to loft MORL (Manned Orbiting Research Laboratory) in high Earth orbit, adding solid rocket boosters in a range of sizes, and even a nuclear powered upper stage – NERVA – that could be used for manned missions to Mars.