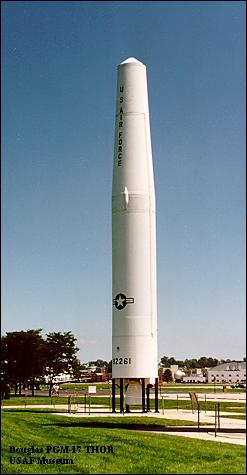 Thor was an intermediate-range ballistic missile (IRBM) that was adapted for use as a space launch vehicle and is the direct ancestor of the Delta rocket family. Development of the Thor was authorized in November 1955 to give the United States Air Force an independent IRBM capability. At the time, the Army Ballistic Missile Agency (ABMA) was already developing the Redstone medium-range ballistic missile and the Jupiter IRBM. Since the Air Force was now free to compete with the Army in creating a similar weapon, a fierce rivalry broke out between the two services.

The Air Force requested proposals for a missile able to carry a nuclear warhead at least 2,400 km – the distance from England to Moscow. The Douglas Aircraft Company came up with a design that used the warhead and guidance system already being developed for the Atlas and the engine from the Navaho. The resulting missile could fit inside a Douglas C-124 Globemaster II for easy transportation to a launch site. The first Thor was ready to fly in August 1956 and the first operational Thors were deployed in England by the end of 1958.

Two-thirds of the Thor's body held the liquid propellants – liquid oxygen and RP-1 – for the missile's single-stage engine whose thrust capability was similar to both the Jupiter IRBM engine and each individual Atlas ICBM booster stage engine. Two vernier engines, similar to those on the Atlas, were attached at opposite sides of the base of the Thor and burned the same fuel as the main engine. Advances in ICBM technology led to the Thor's withdrawal from military service by 1965. But the Thor did not die: it remained critical to the evolution of the American space program, serving as the core booster for many satellite-carrying relatives, not the least of which was the Delta.

Thor-Able was a three-stage rocket that used the Thor IRBM as a core booster. Introduced in 1958 and originally designed to support high-altitude Air Force and civilian reentry vehicle research, the Thor-Able was later modified to carry small satellites into orbit – the first Thor-based variant to do so. Thor-Able was the first generation of what would become the Delta family of space launch vehicles. The second and third stages were adapted directly from the Vanguard rocket.

Even though the nose cones were not recovered in the two successful Thor-Able research flights, the fact that flights of 9,600 km were achieved prompted Douglas Aircraft to propose an ICBM version of the Thor called Thor-Intercontinental, or "Thoric." This proposal was rejected by the Air Force since development of the Atlas and Titan ICBM systems were already well underway. However, Thor-Able research rockets were modified to launch satellites. Each Thor-Able was capable of carrying a maximum 140-kg payload into low Earth orbit (LEO). Since the Thor-Able ultimately evolved into a series of space launch vehicles, the initial version is sometimes referred to as Thor-Able Zero.

A Thor-Able with an added fourth stage, designed specifically to send Pioneer spacecraft toward the Moon. The solid-propellant fourth stage motor remained attached to the payload.

A version of Thor-Able used for high-altitude reentry vehicle testing instead of launching satellites.

A two-stage vehicle introduced in 1960 to carry military payloads into orbit. By using improved Thor-Able first and second stages and eliminating the weight of additional upper stages, Thor-Able Star was able to carry a large LEO payload. The upgraded second stage engine could be restarted to augment and adjust the orbit of the payload. Thor-Able Star was the last version of the Thor-based rockets to be launched from Cape Canaveral carrying the "Thor" name.

A two-stage vehicle that used the Lockheed-built Agena as the upper stage. It served as the booster for the Discoverer program, the United States' first series of spy satellites, and also launched Echo 2, Nimbus 1, and Alouette 1, among others.