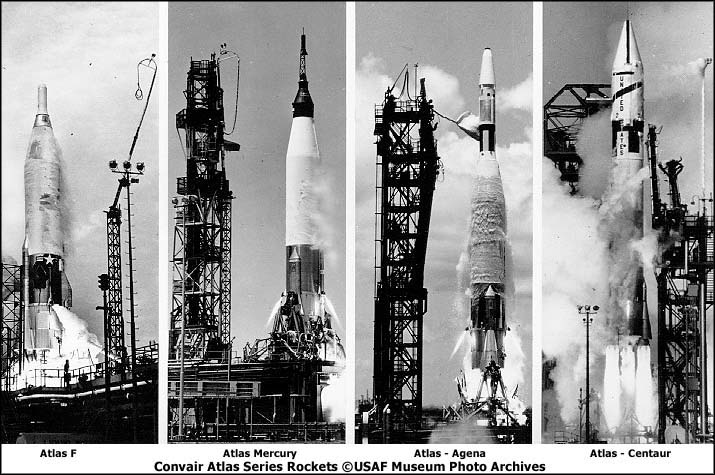 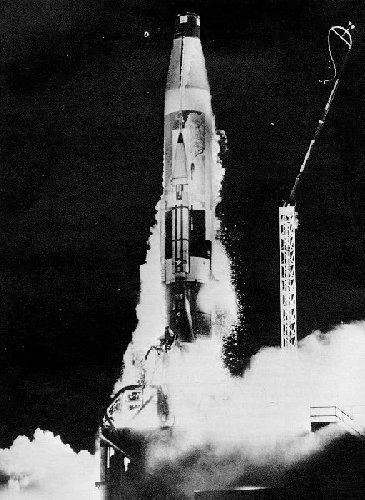 Atlas rockets are a US series of launch vehicles with a history stretching back over half a century. The original Atlas rocket was America's first intercontinental ballistic missile (ICBM); from this evolved a hugely successful family of space launch vehicles. A modified Atlas was used to launch the orbital flights in the Mercury Project, and modern versions of the Atlas continue to play a central role in the United States space program. The current Atlas V is operated by United Launch Alliance (a joint venture between Lockheed-Martin and Boeing).

Atlas has its roots in October 1945 when the United States Army Air Corps sought proposals for new missile systems. A contract was awarded to San Diego-based Consolidated Vultee Aircraft (Convair) Corp. to develop the so-called MX-774 "Hiroc" missile with a range of about 11,000 km and some unusually advanced features for its time. Among these was a single-wall construction of stainless steel so thin that the missile was kept from collapsing only by the internal pressure of its fuel tanks – a design that remains unique to the Atlas family. The weight saved meant increased range. Other new features included a detachable payload section and gimbaled rocket engines for more precise steering instead of exhaust deflector vanes that were then common.

Despite these innovations, the MX-774 project was canceled in 1947 and priority given to developing the Navaho, Snark, and Matador. However, Convair built and test-launched three of the missiles originally authorized. None was a total success, but Convair continued research and conceived another revolutionary idea that would eventually find its way into the Atlas and become its most defining feature. This is the "stage-and-a-half" propulsion system in which three engines – two boosters and a sustainer engine – are fed by the same liquid oxygen/RP-1 (kerosine mixture) propellant tanks and all ignited at liftoff. During the first few minutes of flight, the boosters shut down and fall away (to save weight), while the sustainer continues burning.

In 1951, with the outbreak of the Korean War and rising Cold War tensions, Convair received a new Air Force contract to develop a long-range nuclear ballistic missile incorporating the main features of the MX-774. It was called "Atlas", a name proposed by Convair lead-engineer Karel Bossart and approved by the Air Force. In September 1955 Atlas was given the highest national development priority and by 1959 was being deployed as an ICBM. But operational versions of the Atlas missile, known as the Atlas D, E, and F, were destined not only to be weapons. Having proved themselves reliable and versatile, they became the core boosters for a range of space launch vehicles, including, in chronological order, the Atlas-Able, Atlas-Mercury, Atlas-Agena, and Atlas-Centaur.1, 2, 3

A four-stage rocket with an Atlas D first stage and Able upper stages. After being used in three unsuccessful attempts to send early Pioneer probes to the Moon, the short-lived Atlas-Able was retired in 1960.

A series of rockets based on Atlas first stages and Agena second stages. Two were important in the space program. The Atlas-Agena B used an Atlas E or F first stage and an Agena B – the first Agena to have multiple restart capability – as the second stage. Among the spacecraft launched by Atlas-Agena Bs were the Ranger lunar probes, Mariner 1 and 2, OGO-1, and MIDAS and Samos military satellites. The Atlas-Agena D featured an improved and lightened Agena second stage and, in one of its configurations, solid Burner third and Star 17 fourth stages for geosynchronous launches. Atlas-Agena Ds were responsible for many launches including those of the Lunar Orbiters, Mariner 3, 4, and 5, OAO-1, and the Vela and other reconnaissance satellites. Atlas-launched modified Agena Ds were used a target vehicles in Gemini rendezvous and docking missions.

A family of Atlas-based first and upper stage combinations that evolved from the Atlas D and remains in use. The original Atlas-Centaur, introduced in 1962, used the D as first stage and the powerful liquid oxygen/liquid hydrogen-propelled Centaur as second stage. An improved version, incorporating both upgraded Atlas and Centaur stages, debuted in 1966. By this time, the Atlas ICBM was nearing the end of its operational life and about to be eclipsed by more advanced missiles such as the Titan and Minuteman. But as a space launch vehicle the Atlas-Centaur had taken on a life of its own, no longer directly tied to its military ancestor.

Introduced in the mid-1980s, the II and IIA models incorporate powerful Centaur stages capable of delivering bigger payloads into geosynchronous and other orbits. A third and still more powerful model, the Atlas IIS-Centaur, uses strap-on solid rocket boosters for the first time in the Atlas family. Each of the four Castor 4A strap-ons has a thrust of 440,000 newtons; two are ignited at liftoff and two others about 70 sec into flight after the first pair burn out. The Atlas IIA-Centaur and Atlas IIS-Centaur have a total length of 47.5 m and a core diameter of 3.1 m.

Intended as gradual replacement for the Atlas II series. The Atlas III marks the first break from the traditional Atlas stage-and-half combination. Replacing the old two-booster-plus-sustainer configuration is a single Russian liquid-fueled NPO Energomash RD-180 – a two-chamber version of the RD-170 that powers the Zenit and the first Russian propulsion system to be used by an American-designed launch vehicle. Atlas manufacturer Lockheed Martin currently offers two versions: the Atlas IIIA with a single RL-10A-4-2 engine on the Centaur upper stage, and the Atlas IIIB with two RL-10A-4-2 engines on a stretched Centaur upper stage to increase GTO performance to about 4,500 kg. The first launch of the Atlas III, carrying Eutelsat W4, on May 25, 2000, was a complete success.

The latest incarnation of the Atlas, developed by Lockheed Martin under the Air Force's EELV (Extended Expendable Launch Vehicle) contract and introduced in 1999. The Atlas V comes in various configurations based on a Common Core Booster with RD-180 first stage engine, a reinforced first stage structure, and increased first-stage propellant load. These modifications, combined with the stretched Atlas IIIB-Centaur upper stage, give the Atlas V a minimum GTO (geostationary transfer orbit) payload capacity of over 4,500 kg. Larger variants that use a combination of several common core boosters and solid strap-ons could extend this GTO capacity up to 8,160 kg. Large military payloads and commercial communications satellites make up the bulk of the Atlas V's workload.