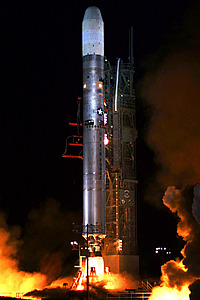 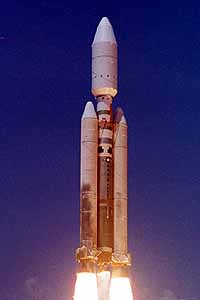 Titan was a large intercontinental ballistic missile (ICBM) that, like the Atlas and Thor, evolved into an important family of space launch vehicles. Its story began with the United States Air Force seeking an ICBM that would surpass the Atlas in sophistication and delivery capacity.

A development contract for what would become the Titan ICBM was issued to the Martin Company in Oct 1955; subsequently, the missile was named after the Greek mythological father of Zeus. Titan I used two stages, both equipped with Aerojet engines that burned liquid oxygen and RP-1, and could deliver a four-megaton warhead over a distance of 12,900 km. Inertial guidance was supplied by a system from Western Electric, Sperry, and Remington Rand Univac that incorporated ground-breaking digital computer technology. The first Titan was test-launched on Feb 6, 1959, with a dummy second stage ballasted with water. In Apr 1962 the missile was declared operational and remained in active service for the next four years. However, it was never modified for spaceflight – unlike its successor.

In 1958, the Air Force gave Martin the go-ahead to develop an improved and far more powerful version of the Titan I which would burn fuels that could remain stored in the missile's fuel tanks for long periods, enabling the missile to be ready for near-immediate launches. Aerojet-General first and second stage engines based on those of the Titan I were modified to burn UDMH (unsymmetrical dimethylhydrazine) and nitrogen tetroxide, substances that could be stored at room temperature for months. Furthermore, since they were hypergolic, the Titan II had no need of a complex ignition system. Designed to be fired from an underground silo, each Titan II could be readied for launch in under 60 s and could carry an 18-megaton warhead over a range of 15,000 km. The first was successfully launched in Mar 1962 and the missile declared operational the following year. Yet the Titan II was destined to serve not only as a weapon. In modified form, as the Gemini-Titan II, it became the launch vehicle for the manned Gemini Project. It was also eventually used to place satellites in orbit. When the Titan missile fleet was deactivated in the mid-1980s, the remaining Titan IIs were modified for unmanned spaceflight as the Titan II-B and II-G.281

The Titan III family of launch vehicles was born out of a need for rockets capable of carrying payloads heavier than those that could be handled by the Atlas-Centaur. Introduced in 1964, the Titan IIIA was basically a Titan II ICBM with an added third stage called a Transtage. The transtage used twin Aerojet engines that burned Aerozine 50 and nitrogen tetroxide liquid fuel. Each engine could produce a thrust of 35,500 newtons (N), giving the Transtage a total thrust of 71,000 N. The Titan IIIA was later modified to carry an Agena third stage in a version introduced as the Titan IIIB Agena.

Launch vehicle introduced in 1982 and similar to the Titan IIIC, on which it was based. The Titan 34D could incorporate either the Transtage third stage or a new upper stage called an Inertial Upper Stage (IUS). The IUS was a two-stage booster which effectively provided a third and fourth stage that allowed the Titan 34D to carry large military payloads into orbit. Performance of the Titan 34D was also improved by adding a one-half segment to the previous generation of Titan III solid rocket boosters, making a total of five and one-half segments per booster. The two resulting United Technologies solid rocket boosters burned powered aluminum/ammonium perchlorate solid fuel and could produce a combined thrust of 11,104,000 N. The first stage Aerojet engine could produce a thrust of 2,365,000 N. An Aerojet second stage engine could produce a 449,000-N thrust. Both the first and second stage engines burned Aerozine 50/Nitrogen Tetroxide liquid fuel. The IUS first stage could produce a thrust of 276,000 N, while its second stage was capable of producing a 116,000-N thrust. Both IUS stages were solid-fueled.

Launch vehicle introduced in 1989 to meet the needs of commercial clients. The Commercial Titan III featured several major improvements over the Titan 34D upon which it was based. It could carry one payload or two separate payloads at the same time, and also employed upgraded first and second stage engines and enhanced solid rocket boosters. Two United Technologies solid rocket boosters were able to produce a combined thrust of 12,450,000 N. Each solid rocket booster was 27.6 meters tall and 3.1 meters wide. The Aerojet dual chamber first stage engine could produce a thrust of 2,440,000 N, while an Aerojet second stage engine could produce a 467,000-N thrust. Both the first and second stage engines burned aerozine 50/nitrogen tetroxide liquid fuel. The Commercial Titan III could incorporate several different third stages depending on the payload application. Third stages available to be flown on the Commercial Titan III included the IUS, Centaur G-Prime, Transfer Orbit Stage (TOS), Payload Assist Module (PAM), and Expendable Shuttle Compatible Orbit Transfer System (ESCOTS). Additionally, the Commercial Titan III could carry up to two payloads at a time. In the dual payload mode, the payload fairing separated into halves about 4.5 min into the flight. The first payload was deployed about one hour into the flight, the second about two and one-half hours into the flight.

Billed as "assured access to space" by the US Air Force, the Titan IV was first launched in 1989 specifically to carry large military satellites in the wake of the Challenger accident. Titan IV development began in 1984 under the US Air Force Complementary Expendable Launch Vehicle (CELV) program. At the time, the CELV program called for a total of 10 launch vehicles which would all employ Centaur third stage boosters. Two of these per year were to be launched from renovated Launch Complex 41 at Cape Canaveral to relieve pressure from the already backlogged Shuttle program. Full development funding for contractor Martin Marietta was secured by Jun 1985. The production contract was modified in 1985 to incorporate a second launch configuration using the existing Inertial Upper Stage (IUS) third stage booster.

Originally intended as a backup launch vehicle for the Shuttle to be used only as conditions warranted, the first completed CELV rockets were to be placed in storage until needed. However, following the stand-down of the Shuttle fleet after the Challenger disaster, the Air Force urgently needed a reliable replacement vehicle to launch their large military satellites. In Aug 1986, the Air Force approved a major restructuring of the CELV program, which was officially renamed Titan IV. A total of 23 launch vehicles were ordered and the Titan IV design was modified to include a two-stage version. This restructure also incorporated the capability of launching polar-orbit Titan IV missions from Vandenberg Air Force Base.

Following the Challenger explosion, NASA abandoned development of a powerful wide-body Centaur upper stage, deeming it too hazardous to carry aboard Shuttles. Since this version of the Centaur upper stage could have been launched aboard Titan IVs, development of this stage was taken over by Martin Marietta under Air Force supervision. By 1988, additional modifications to the Titan IV program emerged. A decision was made to develop improved solid rocket motors to increase payload capability. These would be phased in after Titan IV launches using existing booster technology had occurred. The Air Force also decided to purchase an extra 18 Titan IVs. This expansion precipitated the renovation of Launch Complex 40 at the Cape, providing a total of three launch sites for the Titan IV.

With its first launch on Jun 14, 1989, the Titan IV fleet began to solidify as a program with five vehicle configurations, three launch sites, and a potential mission rate of up to eight launches per year. Although several military payloads were carried aboard Shuttles following their return to flight, a policy decision by the Air Force dictated that the Shuttle would be abandoned as a means of delivering military satellites. This solidified the role of the Titan IV as a vital fixture in military space operations. Like the Commercial Titan III, the Titan IV was based on the Titan 34D. However, the Titan IV was created solely for military objectives.

Initially, the Titan IV flew with two United Technologies solid rocket motors (SRM). Each 7-segment SRM was 34.4 m tall and 3 m wide. These SRMs could produce a combined thrust of 14,220,000 N. However, the United Technologies SRM for the Titan IV were slated to be eventually replaced by new and improved SRM manufactured by Hercules Aerospace Products. The so-called Solid Rocket Motor Upgrade (SRMU) could improve Titan IV performance by about 25%. An Aerojet dual chamber first stage engine could produce a thrust of 2,410,000 N when used with the United Technologies SRM. Performance of this first stage engine could be improved to produce a thrust of 2,430,000 N when used with the new Hercules SRMU. An Aerojet second stage engine is capable of producing a 470,000-N thrust. Both the first and second stage engines burn Aerozine 50/nitrogen tetroxide fuel.

The first Titan IVB was launched from Cape Canaveral Launch Complex 40 on Feb 23, 1997, and carried a Defense Support Program (DSP) satellite for the Department of Defense. This maiden flight of the Titan IVB marked the first time a Cape-launched military Titan mission was declassified. In a change from previous policy, both the nature of the payload and the launch time were made public prior to launch.

The workhorse launchers of the US space program for the foreseeable future will now be the Atlas V and Delta 4 Evolved Expendable Launch Vehicles.