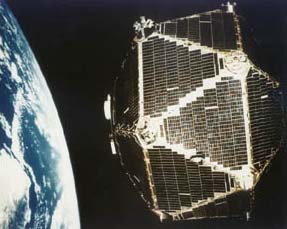 Vela was a series of spacecraft designed to monitor world-wide compliance with the 1963 nuclear test ban treaty (Vela is Spanish for "watchman"). The Vela satellites were launched in pairs into high altitude orbits to detect possible nuclear explosions on Earth and in space, out to the distance of Venus or Mars. The project was directed by the Advanced Research Projects Agency of the Department of Defense; the United States Air Force Space and Missile Systems organization was responsible for the development of the spacecraft. The first three pairs of satellites were so successful, each operating for at least 5 years, that a planned acquisition of a fourth and fifth set of pairs was cancelled. Instead, TRW was awarded a further contract in March 1965 for an Advanced Vela spacecraft series.

The first two pairs of Velas were equipped with 12 external X-ray detectors and 18 internal neutron and gamma-ray detectors. The third pair carried an improved detector package, including an optical nuclear flash instrument. Interestingly, the gamma-ray detectors on board the early Velas picked up the first signs of an important astrophysical phenomenon – gamma-ray bursters – but this information was only declassified about two decades after the military became aware of it. All the spacecraft were approximately 1.4 by 1.4 m in size and were launched by Atlas IIIA-Agena D's from Cape Canaveral.

Like its predecessor, Vela, the Advanced Vela series of spacecraft was designed to monitor worldwide compliance with the 1963 nuclear test ban treaty. The Advanced series added the capability to detect atmospheric nuclear detonation. Additionally, it monitored solar activity (providing radiation warnings for manned missions), terrestrial lightning activity, and celestial X-ray and gamma-ray radiation. All six spacecraft operated for more than 10 years – the last pair, Vela 11 and Vela 12, continuing to function well into the 1980s. Their nuclear detection role was taken over by IMEWS in the 1970s. Vela was touted as the longest continuously operating space system in 1985 when the Air Force shut down the last three craft.