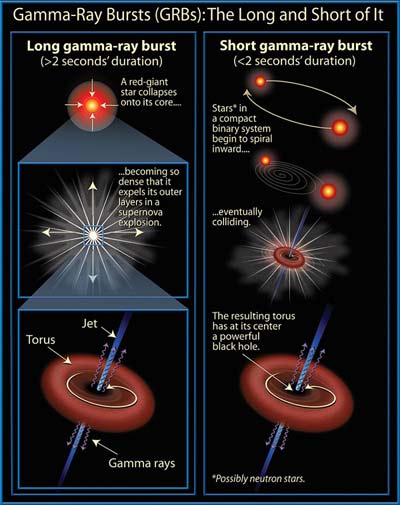 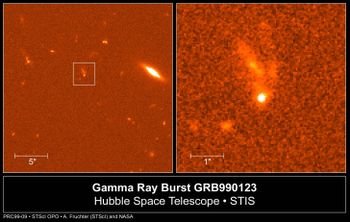 Optical afterglow of gamma ray burst GRB-990123 (the bright dot within the white square and in the enlarged cutout) on January 23, 1999. The object above it with the finger-like filaments is its originating galaxy, which seems to be distorted by a collision with another galaxy. Credit: HST & Wikipedia. 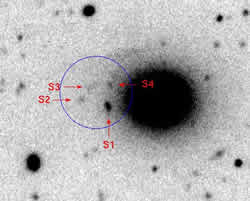 A gamma-ray burst is an intense, short burst of gamma rays and X-rays from a cosmic source known as a gamma-ray burster. Gamma-ray bursts are the most violent and powerful event in the universe and may last from about one hundredth of a second to about ten seconds. GRBs are typically registered once or twice a day from random directions in space by orbiting spacecraft. They were first detected, by chance, in mid-1967 by several of the Vela military satellites designed to monitor compliance with the Nuclear Test Ban Treaty. This discovery, however, was withheld from scientists without security clearances until 1973.

Long-duration bursts are now generally reckoned to involve energy released along narrow jets during a specific kind of hypernova (a violent supernova) involving the final demise of stars that started their lives with masses of 40 to 100 times that of the Sun. In such cases, the remnant stellar core collapses immediately to form a black hole.

The close connection between long gamma-ray bursts and Type Ib/c supernovae points to the progenitor stars being almost exclusively fast-spinning Wolf-Rayet stars. The high angular momentum of such a star causes the collapsing object to form a spinning accretion torus around the rapidly rotating black hole (see left-hand side of graphic above). Regions along the rotation axis are rapidly (within seconds) cleared of debris, allowing energy to be released in two jets aligned with the axis. If Earth happens to lie along the line of sight of one of these jets, it receives a large burst of gamma-rays. If the Earth doesn't lie along the rotation axis then an X-ray flash will be observed as the relativistic jet and attendant shock interacts with the material expelled earlier in a stellar wind by the progenitor star.

Long gamma-ray bursts have been found to occur primarily in small irregular galaxies where stars are deficient in heavier elements. Their occurrence in normal spiral galaxies such as the Milky Way may be a very rare event indeed.

In 1997, the Italian-Dutch BeppoSAX satellite, using a narrow-field X-ray camera, was able to pinpoint the position of some long-duration GRBs precisely enough for their afterglows to be later identified optically. The first optical spectrum of a GRB, obtained at the Keck Observatory, showed that the object lay about halfway to the edge of the observable universe, so that for the burst to have appeared as bright as it did its energy output must have been enormous. For a few seconds, the burster gave out more than a million times more energy than an entire galaxy such as the Milky Way.

On January 23, 1999, a long GRB was imaged for the first time while it was actually in progress. Detectors aboard NASA's orbiting Compton Gamma Ray Observatory picked up and identified the location of the event, and 22 sec later the Robotic Optical Transient Search Experiment (ROTSE) in Los Alamos, New Mexico, took images of the patch of sky from which the emission came. The source, named GRB 990123, was so bright optically that it could easily have been seen through an amateur telescope, yet a spectrum taken using the Keck II telescope on the following night revealed its distance to be an astonishing 9 billion light-years.

A burst in 1998 was tracked to a region near the center of its host galaxy where star birth is occurring at a rapid rate, supporting the idea that gamma-ray bursts come from the death explosions of very young, massive stars. Then, in 2001, observations of the X-ray afterglow of a GRB by the XMM-Newton Observatory provided what may be the clincher. Spectral analysis of the site of the burst, in a galaxy some 10 billion light-years away, showed traces of the elements magnesium, silicon, sulfur, argon, and calcium racing toward us at one-tenth of the speed of light. These light elements and such an expansion rate are exactly the signatures predicted for a violent supernova explosion in which a black hole is created. In October 2002, scientists were able to study the afterglow of a GRB just nine minutes after its onset, thanks to precise coordination and fast slewing of ground-based telescopes upon detection of the burst by the HETE (High-Energy Transient Explorer satellite.

Short gamma-bursts typically last for less than a second (they average about 0.3 s) and are thought to have a completely different source from that of long bursts. The most favored model, first proposed by Martin Rees in the 1990s, involves a merger of two neutron stars or, alternatively, a neutron star and a black hole. This would result in the release of a vast amount of gravitational potential energy. The lack of material around such a system would mean that the energy release stopped as soon as the merger was complete; hence, the short duration of the burst.

Before such a merger, the component stars could be expected to have a led a traumatic life together, each in turn having gone supernova to reach its neutron star state. These explosions would be perfectly capable of throwing the pair of stars clear out of their home galaxy. So in the billions of years it took the neutron stars to coalesce, theory suggests they might have traveled far into intergalactic space. This appears to have happened in the case of GRB 050509b – a short GRB observed in 2005 (see illustration right).


Gamma-ray bursts: a risk to life?

So violent is the GRB phenomenon that it has been put forward as an explanation of the Fermi Paradox – why, if advanced extraterrestrial civilizations exist, no traces of them have yet been found. James Annis, an astrophysicist at Fermilab, near Chicago, has speculated that such events could sterilize entire galaxies, wiping out life-forms before they had the chance to evolve to the stage of interstellar travel.1 "If one went off in the galactic center," he wrote, "we here two-thirds of the way out of the galactic disk would be exposed over a few seconds to a wave of powerful gamma rays." It would be enough, according to Annis, to exterminate every species on Earth. Even the hemisphere shielded by the planet's mass from immediate exposure would not escape, he claimed, since there would be lethal indirect effects such as the demolition of the entire protective ozone layer. The rate of GRBs in the universe today appears to be about one burst per galaxy per several hundred million years. However, Annis points out that theories of GRBs suggest that the rate was much higher in the past, with galaxies suffering one sterilizing event every few million years, thus preventing life from progressing beyond even the most primitive stage. If this view is correct, then there are likely to be no ancient civilizations anywhere in space and it is only now, with the GRB rate at a more modest level, that species have a chance to develop to the spacefaring stage. According to Annis: "It may be that intelligent life has recently sprouted up at many places in the Galaxy and that at least a few groups are busily engaged in spreading." See also extraterrestrial civilizations, hazards to.

1. Annis, James. "An Astrophysical Explanation for the Great Silence," Journal of the British Interplanetary Society, 52, 19 (1999).