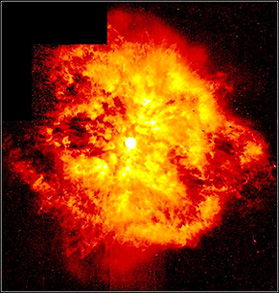 A Wolf-Rayet star is a hot (25,000 to 50,000 K), massive (more than 25 solar masses*), luminous star in an advanced stage of evolution, which is losing mass in the form a powerful stellar wind. Wolf-Rayets are believed to be O stars that have lost their hydrogen envelopes, leaving their helium cores exposed. Often occurring in binary systems, they are doomed, within a few million yr, to explode as Type Ib or Ic supernovae. They are named after the French astronomers Charles Wolf (1827–1918) and Georges Rayet (1839–1906) who studied the first example in 1867.

There are two spectral subclasses of Wolf-Rayets: type WN, which have prominent emission lines of helium and nitrogen, and type WC in which carbon, oxygen and helium lines dominate.

A Wolf-Rayet phase is also present in some central stars of planetary nebulae. In these stars, which have lower masses and will evolve into white dwarfs, the outer envelope has been expelled in the red giant phase, exposing the hot core. Such stars show many of the characteristics of standard Wolf-Rayet stars and are referred to as Wolf-Rayet type stars.

The best known and probably the closest Wolf-Rayet star to Earth is one of the components of the Gamma Velorum star system.

*This figure refers to the mass with which the star begins its life. It may lose about three-quarters of this initial mass during its Wolf-Rayet phase.