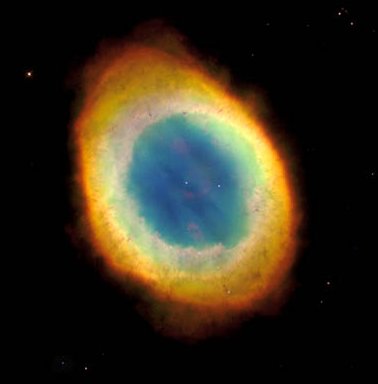 A planetary nebula is a luminous shell of gas, often of complex structure, cast off and caused to fluoresce by an evolved star of less than about 4 solar masses. Planetary nebulae have nothing to do with planets other than their name, which was coined by William Herschel, in the 1780s, because their appearance suggested to him the greenish disk of Uranus.

More than 2,000 planetary nebulae have been discovered in the Milky Way Galaxy out of a total galactic population put at about 10,000.1, 2 This relatively small number reflects the short life span of planetary nebulae – no more than about 50,000 yr. It is a stage through which the Sun may pass some 5 billion years from now.

The formation of a planetary nebula begins when a star has evolved to become a Mira variable, a pulsating red giant that sheds matter in the form of a strong stellar wind. At this stage, the star has an inactive carbon core that is surrounded by a helium-burning shell. Instabilities gradually build up in the outer layers of the star until they break free, expanding at a speed of about 20 km/s and leaving behind a hot, dead stellar core.

High-energy ultraviolet radiation pouring from the exposed core, whose surface temperature is around 100,000 K, is absorbed by the nebular material and reemitted, mostly in certain unusual spectral lines, known as forbidden lines, the brightest of which is the green forbidden line of doubly ionized oxygen at 5007 Å. The ejected gas shell becomes visible as a glowing disk, ring, or more elaborate shape.

Infant planetary nebulae sometimes show evidence of a bipolar flow, as in the case of the Butterfly Nebula or Ant Nebula. In deep exposures, the matter ejected at the precursor Mira-variable stage can sometimes also be detected as an extended halo.

Planetary nebulae are typically about 1 light-year in diameter. There is, however, quite a range of sizes due mainly to the fact that these objects expand with age. For example, NGC 3918 in Centaurus, which may be only 3,000 years old, measures only 0.3 light-year across whereas the famous Helix Nebula in Aquarius, which is believed to be at least 10,000 years old, spans roughly 2.5 light-years.

Although the density of ionized gas in a planetary nebula is higher than that of the surrounding interstellar medium, it is still extremely low by everyday standards. Densities range from about 103 particles per cm3 to as much as 106 particles per cm3 in the clumpier parts of young nebulae. The temperature of the nebular gas averages about 10,000 K, with a range of 8,000 K to 23,000 K, depending on the individual nebula, the location within the nebula, and the method used to derived the temperature (for example, observations of He I recombination lines tend to give lower temperatures than those derived from H I recombination lines).

FLIERs (fast, low ionization emission regions) are blobs of material that form a symmetrical pattern in some planetary nebulae, such as the Blinking Nebula and Saturn Nebula. Their origin is not well understood. Some of the observed characteristics of FLIERs suggest that they are like sparks flung outward from the central star within the past thousand years or so. Yet they can also be interpreted as essentially stationary structures, from the surface of which gas is scraped by the outward flow of other gas.

The most widely used scheme to classify planetary nebulae by their appearance has been the Vorontsov-Velyaminov scheme. However, in recent years, the use of more powerful instruments, such as the Hubble Space Telescope, and electronic detection methods have revealed a much greater diversity in the morphology of planetary nebulae than was previously realized. To the list of known objects conforming to the classical ring and disk shapes have been added other, often young planetary nebulae, with more complex shapes. Roughly one-tenth of planetary nebulae have a prominent bipolar structure. A few are significantly asymmetric.

Various ideas have been put forward to account for the broad range of morphologies observed. These include interactions of the nebular gas with magnetic fields from the central stars,3 interactions between material moving away from the star at different speeds, multiple ejection events, and, in the case of strongly bipolar nebulae, gravitational interactions with companion stars if the central stars are members of binary systems.

The majority of planetary nebulae occur near the plane of the Milky Way, with the greatest concentration near the galactic center, indicating that they are primarily disk objects. However, a few been found in globular clusters (for example, Pease 1 in M15) and elsewhere in the galactic halo.

Some planetary nebulae have also been identified beyond the Milky Way, in other galaxies of the Local Group, including the Magellanic Clouds and the Andromeda Galaxy.

In total, planetary nebulae return to the interstellar medium about 5 solar masses of material each year (about 15% of all the matter expelled by all sorts of stars). This ejected matter, enriched in elements such as carbon, nitrogen and oxygen, is the stuff from which a new generation of stars will eventually form.