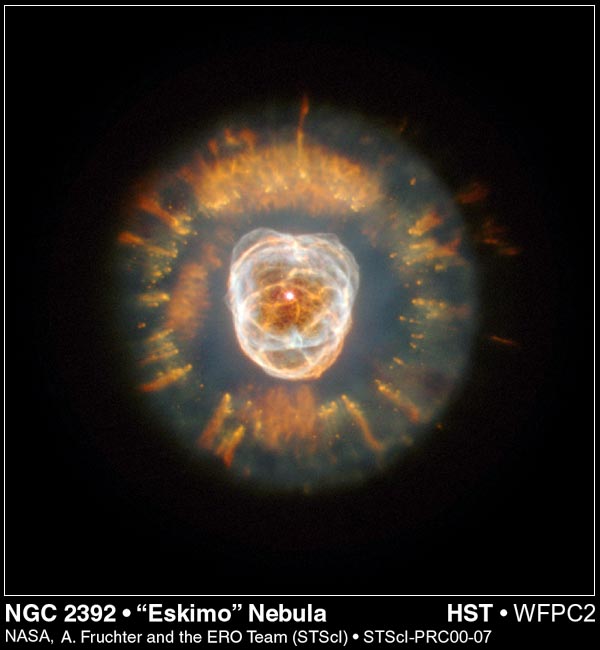 The Eskimo Nebula (NGC 2392) is a planetary nebula in the constellation Gemini that looks like a face peering out of the fur-lined hood of parka. It was discovered by William Herschel in 1787. The parka is really a disk of material embellished with a ring of comet-shaped objects, with their tails streaming away from the central star. The Eskimo's face is formed from a bubble of material being blown into space by the central star's intense wind of high-speed material. The nebula is composed of two elliptically shaped lobes of matter streaming above and below the dying star.

Scientists believe that a ring of dense material around the star's equator, ejected during its red giant phase, created the nebula's shape. This dense waist of material is plodding along at 115,000 km/h, preventing high-velocity stellar winds from pushing matter along the equator. Instead, the 1.5-million-km/h winds are sweeping the material above and below the star, creating the elongated bubbles. The bubbles are not smooth like balloons but have filaments of denser matter. Each bubble is about 1 light-year long and about half a light-year wide. One possible explanation is that these objects formed from a collision of slow- and fast-moving gases.