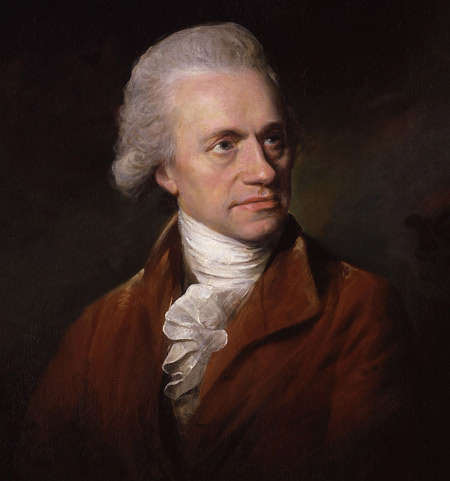 William Herschel (originally Friedrich Wilhelm) was a German-born English astronomer, brother of Caroline Herschel and father of John Herschel, who discovered Uranus (1781), its two largest moons, Oberon and Titania (1787), and two moons of Saturn, Mimas and Enceladus (1789). He also effectively founded stellar astronomy. With the patronage of George III he built in 1789 what was then the world's largest telescope – a Newtonian reflector with a focal length of 12 m (40 ft) and a mirror diameter of 1.2 m (48 in). A patient, careful observer, he visually scanned the entire northern sky and catalogued more than 800 double stars and 2,500 nebulae. By counting stars in different parts of the sky, Herschel concluded in 1785 that the Sun is near the center of a flat system of stars roughly five times wider than it is thick. At first, he agreed with Thomas Wright that nebulae might be external galaxies but later changed his mind when he failed to resolve them telescopically into stars.

William was also a talented musician. He was a hautboy player in the Hanoverian guard and, after he came to England, at first held posts in Yorkshire as bandmaster of militia and organist. He went to bath as organist, and there composed much church music. His published works include a symphony and some military music.

Despite his astronomical credentials, in matters of astrobiology his contributions were less impressive. Swimming against the tide of professional opinion, he insisted that the habitability of the Moon was an "almost absolute certainty" and, in common with Isaac Newton before him, was convinced there were intelligent beings living inside the Sun, which he believed to be a large planet with a cool, temperate interior (see Sun, life on). Sunspots he took to be apertures in the Sun's bright outer shell through which we could see inside and the solarions could peek out at the stars. His observations of Mars in the 1780s led him to surmise that the bright areas at the poles were ice caps, the dark patches were seas, and the lighter, yellowish areas were dry land. The inhabitants, he concluded, "probably enjoy a situation in many respects similar to ours" (see Mars, life on).

In 1800, using a thermometer and a prism, he discovered infrared radiation. His work was continued by his son John.

A Herschelian telescope is a reflecting telescope, of a design conceived by William Herschel and used in his giant 48-in instrument, in which the primary mirror is tilted so that light is focused near one side of the open end of the tube. The eyepiece then picks up this light directly, avoiding light loss from reflection by a secondary mirror. The drawback is astigmatism, unless the focal ratio is large.