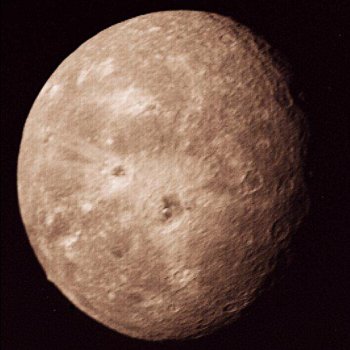 Oberon is the second largest moon of Uranus and the 18th in order from the planet. Oberon was discovered by William Herschel on Jan 11, 1787. It is named after the king of the Fairies in Shakespeare's A Midsummer Night's Dream and is also known as Uranus IV.

Oberon's heavily cratered surface, featuring far more and larger craters than do Ariel or Titania, is clearly ancient. Some of the craters have bright rays similar to those seen on Jupiter's moon Callisto and some of the crater floors are dark – covered perhaps with a mixture of carbonaceous substances and ice that erupted from below. Large faults run across the entire southern hemisphere, indicating geologic activity in Oberon's youth. In the image shown here, note the large mountain, about 6 km high, that stands out on the lower left limb.