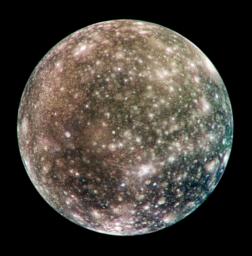 Fig 1. The only full-color image of Callisto taken by the Galileo orbiter (May 2001). 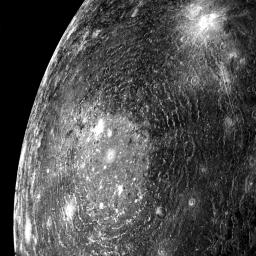 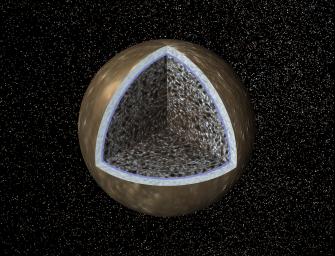 Callisto is the second largest moon of Jupiter and the third largest in the solar system, after Ganymede and Titan. Orbiting beyond Jupiter's main radiation belts, Callisto is the outermost of the Galilean satellites. It also has the lowest density of the Galilean satellites and probably a very different internal structure. The interiors of the other three big Jovian moons are thought to be completely differentiated, with clear boundaries between core, mantle, and crust. This is probably due to gravitational squeezing by Jupiter which helped keep the interior of the inner Galileans molten long enough for heavier materials to settle fully at the greater depths. Being further out, Callisto seems to have arrested early in its development so that its internal rock is not fully segregated.

Callisto's surface, the darkest of any of the Galilean moons (although still twice as bright as our own Moon), is the most heavily cratered of any object in the solar system, testifying to an almost complete absence of geological activity over the past 4 billion years. Indeed, Callisto is the only body greater than 1,000 km in diameter which shows no signs of having undergone any significant resurfacing since the end of the late bombardment phase of the solar system about 3.8 billion years ago. Its surface features are dominated by shallow impact craters and rings. Two large features, Valhalla and Asgard, which resemble bullseyes, are believed to be the remains of massive impacts. Seven chains of impact craters have been mapped and are thought to have been formed when comets were broken up by Jupiter's gravity and collided with Callisto.

In February 1999, the discovery was announced, based on measurements taken by Galileo's near-infrared mapping spectrometer, of carbon dioxide ice on Callisto's surface together with a very tenuous atmosphere of carbon dioxide. Since this gas must constantly leak into space under the action of ultraviolet rays from the Sun, it must be continuously replenished, possibly by venting of carbon dioxide from the interior. This discovery means that all four Galilean moons are now known to have extremely tenuous atmospheres.


Possibility of ocean and life on Callisto

The first indication that Callisto might be of astrobiological interest came in Oct 1998, with the publication of a paper proposing that Callisto, like Europa, might have an underground ocean of water and perhaps the basic ingredients for life. This suggestion followed from measurements of Callisto's magnetic field by the Galileo spacecraft. Krishnan Khurana of the University of California, Los Angeles, and colleagues found that Callisto's magnetic field fluctuates in time with Jupiter's rotation, suggesting that Jupiter's powerful magnetic field generates electric currents in the moon which, in turn, give rise to the fluctuations. In trying to understand how currents could flow within the body of Callisto, Khurana et al hypothesized the existence of a subterranean ocean of salty water which would effectively act like a giant battery. This idea was given further credence by Galileo data which showed that the electric currents within Callisto flow in different directions at different times.

Whereas Europa is heated internally both by tidal stresses and the decay of radioactive elements, Callisto is only significantly heated by the latter. Therefore, the outermost Galilean moon may not be quite as good a prospect in the search for extraterrestrial life as its Jovian neighbor. Nevertheless, it seems certain now that future probes will scrutinize both Europa and Callisto for signs of subsurface water and prebiological or biological activity. One possibility is that, if primitive life has evolved on these worlds, it may be similar to the halophiles found in highly saline environments on Earth. Plans to investigate the astrobiological potential of the Galilean moons have also been given a boost by the discovery of a large lake deep under the ice of Antarctica, Lake Vostok, which may serve as a test-bed for instrumentation.