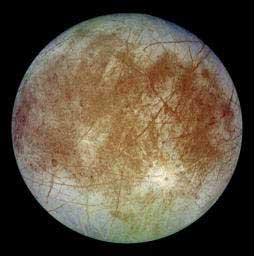 Trailing hemisphere of Europa in approximate natural color. Dark brown areas are rocky material derived from the interior, implanted by impact, or from a combination of interior and exterior sources. Bright plains are visible in the polar areas (top and bottom). Long, dark lines are fractures in the crust, some of which are more than 3,000 km (1,850 miles) long. The bright feature containing a central dark spot in the lower third of the image is a young impact crater some 50 km (31 miles) in diameter. 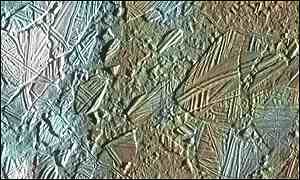 Very high resolution view of the Conamara Chaos region showing an area where icy plates have been broken apart and moved around laterally. The top of this image is dominated by corrugated plateaus ending in icy cliffs over a hundred meters high. Debris piled at the base of the cliffs can be resolved down to blocks the size of a house. A fracture that runs horizontally across and just below the center of the Europa image is about the width of a freeway. 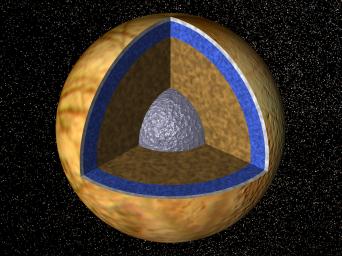 Cutaway view of the possible internal structure of Europa. A metallic (iron, nickel) core (gray) is drawn to the correct relative size. This is surrounded by a rock shell (brown), which in turn is surrounded by a shell of water in ice or liquid form (blue and white). The surface layer of Europa is shown as white to indicate that it may differ from the underlying layers. 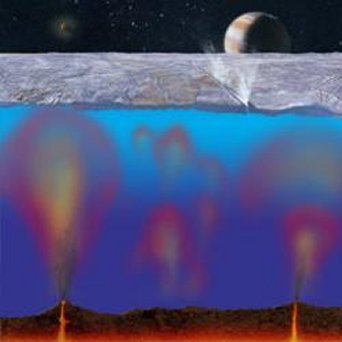 Artist's conception of an underground ocean on Europa. If the moon's heat – possibly from volcanic activity in its rocky mantle – is intense enough and the ice shell is thin enough, the ice shell can directly melt, causing regions of what appear to be broken, rotated and tilted ice blocks on the surface. Credit: Michael Carroll/NASA/JPL. 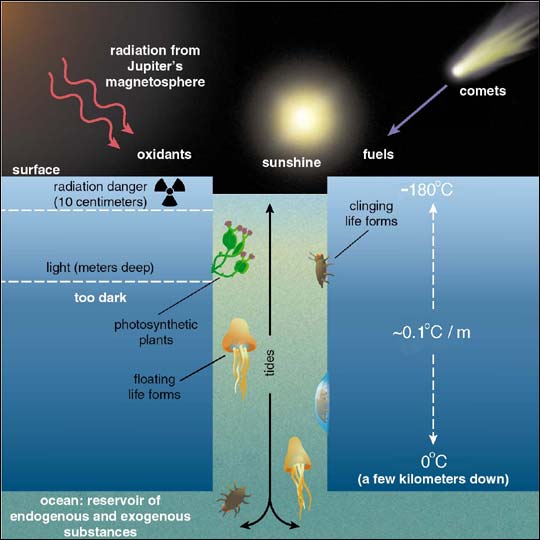 A possible scenario for life on Europa. )Richard Greenberg.) 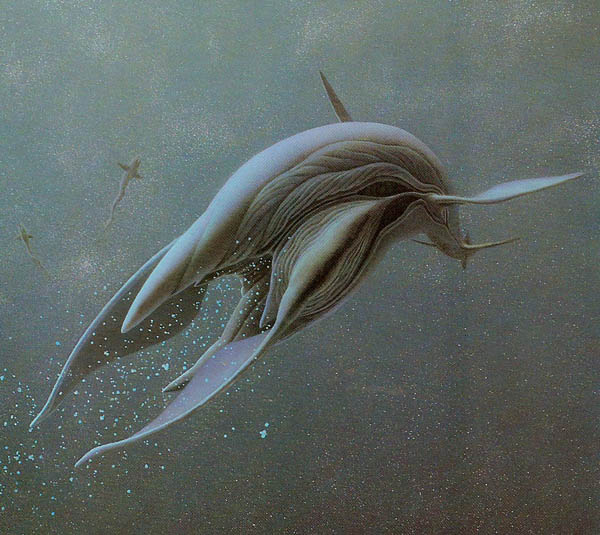 Hypothetical advanced underwater life such as might exist in Europa's ocean.
(Adolf Schaller.)

Europa is the smallest of the four Galilean moons (slightly smaller than our own Moon) and the second nearest Galilean to Jupiter after Io. Europa's surface is remarkably smooth and flat, with no differences in relief of more than a few hundred meters. The surface composition of water ice results in an albedo five times higher than that of the Moon.

Two types of terrain are in evidence. The first is mottled reddish-brown or gray and covered mainly by small hills. Linear ridges in these regions are thought to be the frozen remnants of cryovolcanic activity where liquid or partially frozen water has erupted onto the Europan surface and instantly frozen. The second type of terrain consists of smooth plains, crisscrossed by large numbers of cracks, both curved and straight, some extending for thousands of kilometers. The fracture patterns closely resemble those seen in the broken ice pack in the Earth's Arctic and Antarctic Oceans. From these surface clues, and the fact that Europa is heated internally both by tidal forces and radioactive decay, scientists have hypothesized that a sub-surface ocean of liquid might exist on the moon and that, if this is the case, life of some sort may have evolved in it. Few craters are in evidence, especially larger ones, suggesting that the surface has been resurfaced within the past few million years. Europa, like Io, is suspected of having an iron-sulfur core.

Observations with the Hubble Space Telescope in 1994 revealed the presence of a tenuous atmosphere of oxygen molecules, with a pressure barely one hundred billionth that of the Earth. In the words of one of the researchers who made the discovery: "If all the oxygen on Europa were compressed to the surface pressure of Earth's atmosphere, it would fill only about a dozen Houston Astrodomes." The oxygen is non-biological in origin. Europa's icy surface is exposed to sunlight and is impacted by dust and charged particles trapped within Jupiter's intense magnetic field. Together these processes cause the frozen water ice to produce vapor as well as gaseous fragments of water molecules. After the gas molecules are produced, they undergo a series of chemical reactions that ultimately form molecular hydrogen and oxygen. The relatively lightweight hydrogen gas escapes into space, while the heavier oxygen molecules accumulate to form an atmosphere which may extend 200 km (125 mi) above the surface. Since the oxygen gas slowly leaks into space, it is clear that it must be continuously replenished.

In September 1999, the discovery was announced, based on infrared data from Galileo, of frozen sulfuric acid on Europa. This may originate from inside the moon or from volcanoes on neighboring Io. Either way, the implications for the possibility of Europan life are ambiguous. While sulfuric acid is an unpleasant chemical for humans, many bacteria on Earth prosper in sulfur- and acid-rich environments.

Great interest surrounds the likelihood that a large ocean of liquid water exists beneath the icy surface of Europa. This ocean may be as much as 150 km deep, which would mean it contained twice as much water as exists in all of Earth's oceans.

The history of this idea can be traced back to a 1971 theoretical paper in which the author, the American astronomer John S. Lewis, argued that " ... the Galilean satellites of Jupiter and the large satellites of Saturn, Uranus, and Neptune very likely have extensively melted interiors."

Speculation about a sub-ice ocean and hypothetical Europan life stepped up following Voyager 2's close encounter with Europa in 1979,1, 2 while by the time the Galileo spacecraft arrived at Jupiter in 1995, the ocean model was well established as a plausible hypothesis. What the new probe found only strengthened its case. High-resolution images provided clear evidence of near-surface melting and the movements of large blocks of icy crust, similar to those of icebergs or ice rafts on Earth.3 Galileo's cameras also revealed very few impact craters – a sure sign that resurfacing has taken place in geologically recent times, no more than 30 million years ago. Various sources of heat have been discussed by planetary astronomers over the years as the means by which Europa's ice shelf might be kept molten from below, but the principal mechanisms are now thought to be tidal distortions caused by the shifting gravitational pulls of Jupiter and the other large Jovian moons and the internal decay of radioactive elements.

Similar tidal heating may have created an ocean on Callisto, drives volcanoes on Io, and may give rise to water geysers on Europa, though none have yet been observed.

Together with Mars, Enceladus, and Titan, Europa is considered one of the most biologically interesting worlds in the solar system. There are several reasons for this, among them: 1) the likely presence of a sub-surface ocean of liquid water (perhaps as much as 150 km deep) which could provide a medium and solvent for life; 2) intense radiation from Jupiter's magnetosphere striking ice on Europa's surface and releasing oxygen, which if it finds its way into ocean could provide a fuel for life; and 3) the possible presence of undersea volcanic vents, which could furnish energy and nutrients for organisms.

On Earth, in recent years, a profusion of previously unsuspected life-forms has been found at great ocean depths, thriving, in the absence of both light and oxygen, on chemical nutrients welling up through through hydrothermal vents from the interior of the planet. Indeed, many scientists now speculate that terrestrial life may actually have originated under such conditions (see life, origin). Europan life, too, may have arisen in this way.

If microscopic organisms developed on Europa, is there the possibility that some of them have evolved into large, multicellular forms? Much depends on how freely oxygen, generated at the surface by the interaction between surface ice and intense incident radiation (from Jupiter's powerful magnetosphere), has been able to make its way down into the ocean. If the Europan sub-surface ocean is rich in ocean it would have the potential to support a rich diversity of complex life, including creatures as large or larger than the great whales on Earth.


When will we know more?

Following the Galileo Extended Mission, which supplied valuable new data on Europa, other spacecraft to this intriguing moon were considered. As JPL's Robert Pappalardo has pointed out, "Icy moons may be the most common habitats for life in the Universe, so studying Europa will help tell us not just whether life exists elsewhere in our Solar System, but how common life may be throughout the Universe."

In the light of the extraordinary findings of the Galileo spacecraft and the success of its extended investigation, the Galileo Europa Mission, a number of future missions were evaluated with an eye to finding out more about Europa and, in particular, whether it has a sub-surface ocean of liquid water and, possibly, even life. The first of these is likely to be the Europa Orbiter, which could serve as a precursor to other, more ambitious projects for which proposals have been considered. Among the ideas that have been looked at for exploring Europa beyond the Orbiter are:

Europa Ice Clipper:– a flyby mission to obtain samples of Europa using an impact sampling method. As the Clipper approached the moon it would release a 10-kilogram hollow copper sphere on an impact trajectory. The spacecraft would then divert to fly through the plume of surface material thrown out by the collision of the sphere.

Europa Ocean Explorer (Icepick):– a mission to soft land on Europa and explore what lies beneath its icy crust with cryobots and hydrobots. Some of the techniques and instrumentation required by this project were developed as part of NASA's Europa Vostok Initiative – a NASA program of investigation of Lake Vostok with the ultimate goal of developing instrumented probes to explore the sub-ice oceans thought to exist on Europa and Callisto. Important preliminary data have been obtained from the Lo'ihi Underwater Volcanic Vent Mission Probe.