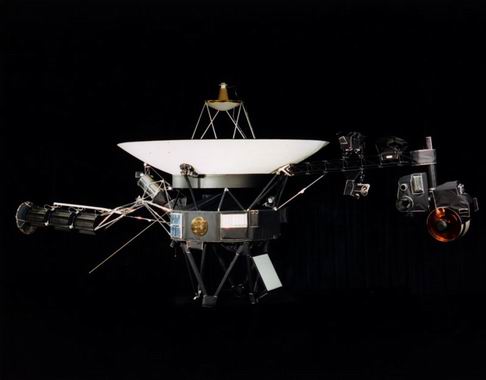 Voyager 2 is an interplanetary probe launched on August 20, 1977, which flew past Jupiter (July 9, 1979) and Saturn (August 25, 1981), and became the first spacecraft to encounter Uranus (January 24, 1986) and Neptune (August 24, 1989), taking advantage of a once-in-176-year alignment to take a grand tour of the outer planets. In December 2018, NASA announced that Voyager 2 had entered interstellar space, becoming the second spacecraft to do so after its sister craft Voyager 1.

Among its many findings, Voyager 2 discovered Neptune's Great Dark Spot and 450-m/s (1,000-mph) winds. It also detected geysers erupting from the pinkish-hued nitrogen ice that forms the polar cap of Neptune's moon Triton. Working in concert with Voyager 1, and helped discover actively erupting volcanoes on Jupiter's moon Io, and waves and kinks in Saturn's icy rings from the tugs of nearby moons. In August 2019, Voyager 2 was about 18.1 billion km (11.2 billion miles) from the Sun, equivalent to a round-trip light-travel time of j33.5 hr. Its departure speed from the solar system is 15.4 km/s (34,390 mph).

The future trajectory of Voyager 2 among the stars was determined by its final planetary encounter, with Neptune. An earlier planned route past Neptune would have resulted in the probe coming within 0.8 light-years of Sirius in just under 500,000 years from now – easily the closest and most interesting foreseeable stellar encounter of the four escaping probes. However, the Neptune flyby trajectory actually chosen (the "polar crown" trajectory) means that the nearest Voyager 2 will come to any star in the next million years is 1.65 light-years when it passes Ross 248 in about 40,000 years. It is heading in the general direction of the constellation Telescopium. Along with Voyager 1, it is now involved in the Voyager Interstellar Mission.