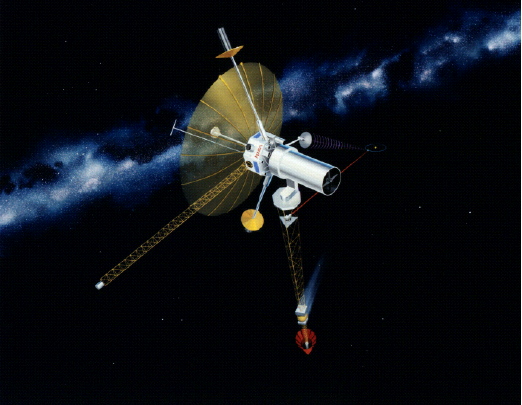 A nuclear electric propulsion system for the 1,000-Astronomical Unit (TAU) mission. This JPL vehicle concept has the potential for enabling an unmanned interstellar precursor mission to 1,000 AU (0.016 light-year) with a 50-year trip time.

Interstellar probes are space probes that pass through the boundary between interplanetary space and true interstellar space – the region between stars that is occupied by the interstellar medium – and that possibly travel to the vicinity of other stars (see interstellar travel). Four spacecraft launched from Earth, Pioneer 10, Pioneer 11, Voyager 1, and Voyager 2, have already achieved solar escape velocity so that they are now on departure trajectories from our solar system. For as long as they remain functional (two are still active), they afford the opportunity to explore the environment of space out to the limit of the Sun's magnetic influence, the heliopause, and beyond (see also heliosphere and termination shock). Thereafter, although contact with them will be lost, they will continue to drift slowly toward the stars bearing messages (see Pioneer plaque, Voyager interstellar record) in the remote event that they are intercepted and recovered by an alien intelligence. See also Voyager Interstellar Mission.

The twin Voyagers and Pioneers were not, of course, designed for interstellar work: this is simply a bonus following their successful explorations of the outer planets. However, a number of proposals have been made, and some are presently under active consideration, for spacecraft specifically designed to explore the outer boundary of the solar system and the margins of interstellar space. These so-called interstellar precursor missions include the Interstellar Boundary Explorer, the Interstellar Probe Mission, TAU (Thousand Astronomical Unit mission), and the Interstellar Precursor Mission. An early design for a true interstellar probe that would journey to a nearby star was Project Daedalus. See also Project Longshot.

An intriguing possibility is that extraterrestrial probes have been sent to explore the solar system and may, even now, be in our close vicinity awaiting our efforts to detect them. These probes might include Bracewell probes (also known as "messenger probes") and/or self-replicating spacecraft, sometimes referred to as von Neumann probes. They may also include extraterrestrial varieties of self-repairing spacecraft.