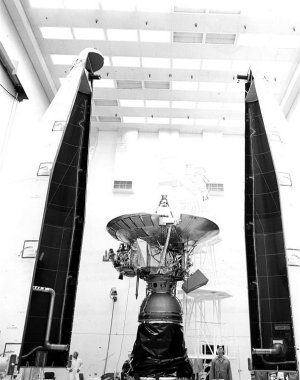 Pioneer 11 about to be put inside its protective shroud.

Pioneer 11 was the first spacecraft to fly past Saturn. Like its sister probe, Pioneer 10, Pioneer 11 flew past Jupiter, becoming the second spacecraft to do so. However, because Pioneer 10 had achieved all its main mission objectives at Jupiter, Pioneer 11 was put on a trajectory by mission controllers that used Jupiter as a gravitational slingshot to redirect the probe on a course toward Saturn. Subsequently, Pioneer 11 began a long journey out of the Solar System.

Pioneer 10 and 11 are identical in appearance and instrumentation. For details of the spacecraft, see the entry on Pioneer 10.

Pioneer 10 and 11 were recommended by the Space Science Board of the National Academy of Sciences in 1968 as low-cost exploratory missions to the giant planets Jupiter and Saturn, approved by NASA in February 1969, and launched three and four years later, respectively.

Launched in Apr 1973, Pioneer 11 reached Jupiter in December 1974, following Pioneer 10, which flew by the planet a year earlier. It came in under the giant planet's south pole and skimmed within 42,800 km (26,600 mi) of Jupiter's cloud tops. The flyby was so close – the closest passage ever made past Jupiter – that the spacecraft received heavy bombardment from Jupiter's radiation belts, which are 40,000 times more intense than Earth's. Only Pioneer's extreme speed saved its electronics from severe damage.

Maps of Jupiter's severe radiation environment provided by Pioneer 10 and 11 permitted the later and much more sophisticated missions Voyager 1 and 2, and the ESA-NASA spacecraft Ulysses, to be designed to survive Jupiter's radiation. They also paved the way for Galileo's arrival at Jupiter and the Cassini mission to Saturn.

The gravity assist resulting from the close flyby of Jupiter threw Pioneer 11 160 million km (100 million mi) above the plane of the planets and on toward Saturn. In 1979, Pioneer 11 flew within 21,000 km (13,000 mi) of Saturn, becoming the first spacecraft to visit that planet. Among its discoveries were two new moon and a new ring; it also charted the magnetosphere, the magnetic field, and the general structure of Saturn's interior. The spacecraft's instruments measured the heat radiation from Saturn's interior.

In 1990 Pioneer 11 became the fourth spacecraft to journey beyond the Solar System, heading in the same direction that the Sun moves through interstellar space.

The last communication was received from Pioneer 11 on November 30, 1995; its electric power source exhausted, it could no longer operate any of its experiments or point its antenna toward Earth. Pioneer 11 is headed in the direction of the constellation Aquila and may pass relatively near the star Lambda Aquila in about 4 million years. On a shorter time scale, Pioneer 11 will achieve its first stellar encounter of sorts when it passes about 1.65 light-years (0.51 pc) from the red dwarf AC +79° 3888 in the year 42,405 AD. At present, AC +79° 3888 is 16.6 light-years (5.1 pc) from the Sun, but is approaching so rapidly that by 40,598 AD. it will be just under 3 light-years (0.9 pc) away – roughly the same distance that Pioneer 11 will be from the Sun at that time. At the start of 1999, Pioneer was approximately 50 astronomical units (7.5 billion km, 4.7 billion mi) from the Sun.