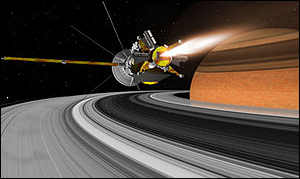 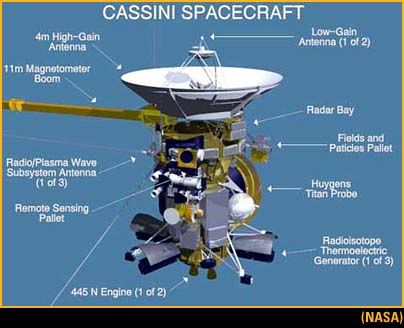 Cassini is a NASA and European Space Agency spacecraft to the planet Saturn, which was launched on October 13, 1997. The 5,650-kg (12,450-lb) spacecraft went into orbit around Saturn in June 2004 after a gravity-assisted journey that took it twice around Venus and once each around the Earth and Jupiter. Upon arrival, Cassini engaged in a series of complex orbital maneuvers in order to achieve its major science goals, which include observing Saturn's near-polar atmosphere and magnetic field from high inclination orbits, several close flybys of the icy satellites Mimas, Enceladus, Dione, Rhea, and Iapetus, and multiple flybys of Saturn's large, enigmatic moon Titan. A high point of the mission was the release of the Huygens Probe and its descent into Titan's atmosphere.