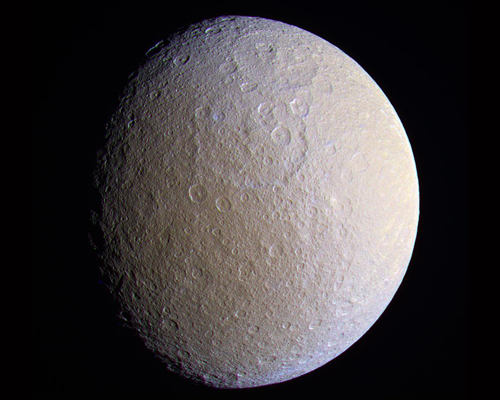 Rhea seen by the Cassini spacecraft's narrow-angle camera from a distance of 341,000 km (212,000 miles) on December 23, 2005. The hemisphere shown faces away from Saturn. North on Rhea is up and tilted 30° to the left. This enhanced color view is a combination of images taken using filters sensitive to ultraviolet, visible green and infrared light. Image scale is 2 km per pixel. 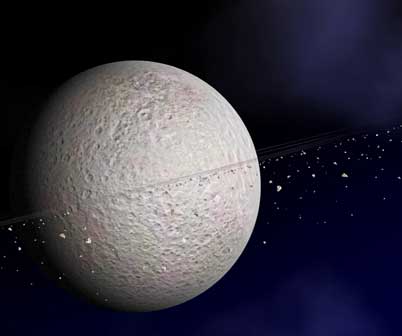 Artist concept of the ring of debris that may orbit Rhea. The suggested disk of solid material is exaggerated in density here for clarity.

Rhea is the second largest moon of Saturn. It was discovered on December 23, 1672, by Giovanni Cassini and is also known as Saturn V. It appears to resemble Dione in composition, albedo features, and variety of terrain. It probably has a rocky core extending out to about one third of the way from the center, the rest of the moon being composed primarily of water ice.

Rhea is one of the most heavily cratered satellites in the solar system. It also displays bright, wispy markings. Of the two main types of terrain present, one contains craters up to and exceeding 40 km (25 miles) in diameter; the other, in parts of the polar and equatorial regions, has no craters larger than 40 km. This suggests that a major resurfacing event took place early in the moon's geological history.

The leading hemisphere of Rhea is heavily cratered and uniformly bright. As on Callisto, the craters lack the high relief features seen on the Moon and Mercury. The trailing hemisphere displays a network of bright swaths on a dark background and few visible craters. It had been thought that these bright swaths might consist of material thrown out of ice volcanoes in Rhea's ancient past when the moon still had a liquid interior. However, recent observations of Dione, which has an even darker trailing hemisphere and similar but more prominent bright streaks, have shown that the streaks are ice cliffs, and it seems reasonable to assume that this is also the case on Rhea.

In March 2008, it was announced that the Cassini spacecraft had found evidence of material orbiting Rhea – the first time rings may have been found around a moon. A broad debris disk and at least one ring appear to have been detected by a suite of six instruments on Cassini specifically designed to study the atmospheres and particles around Saturn and its moons.

The apparent debris disk measures several thousand miles from end to end. The particles that make up the disk and any embedded rings probably range from the size of small pebbles to boulders. An additional dust cloud may extend up to 5,900 km (3,000 miles) from the moon's center, almost eight times the radius of Rhea.

Since the discovery, Cassini scientists have carried out numerical simulations to determine if Rhea can maintain rings. The models show that Rhea's gravity field, in combination with its orbit around Saturn, could allow rings that form to remain in place for a very long time. The discovery was a result of a Cassini close flyby of Rhea in November 2005, when instruments on the spacecraft observed the environment around the moon.

One possible explanation for these rings is that they are remnants from an asteroid or comet collision in Rhea's distant past. Such a collision may have pitched large quantities of gas and solid particles around Rhea. Once the gas dissipated, all that remained were the ring particles. Other moons of Saturn, such as Mimas, show evidence of a catastrophic collision that almost tore the moon apart.