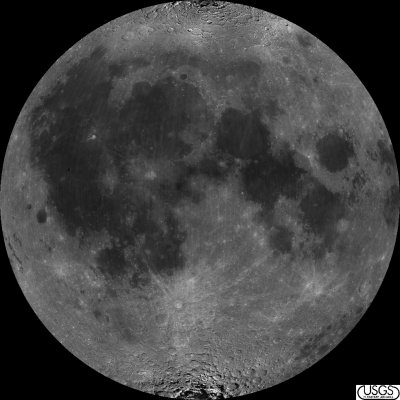 Map of the Moon's albedo at a wavelength of 750 nm (just longward of visible red) constructed from images from the Clementine probe.

Albedo (from the Latin albus for "white") is a measure of the reflecting power of a nonluminous object, such as a planet, moon, or asteroid. It is expressed as the fraction of light and/or other radiation falling on an object that is reflected or scattered back into space; its value ranges from 0, for a perfectly black surface, to 1, for a totally reflective surface.

Several different types of albedo are defined. The two main categories are normal albedo and Bond albedo. Normal albedo, also known as normal reflectance, is a measure of a surface's relative brightness when illuminated and observed vertically. Within this category, visual albedo refers to radiation only in the visible part of the spectrum, whereas geometric albedo, also known as physical albedo, is the ratio between the brightness of an object as seen from the direction of the Sun, and the brightness of a hypothetical white, diffusely reflecting sphere of the same size and at the same distance. The normal albedo of a moon or asteroid, which can be calculated if the object's apparent brightness, size, and distance are known, is an important indicator of surface composition. Bond albedo (named for the American astronomer George Bond), also known as spherical albedo, is the fraction of the total incident solar radiation – the radiation at all wavelengths – that is reflected or scattered by an object in all directions; this is an important measure of a planetary body's energy balance.

Among familiar objects, Earth has a visual albedo of 0.37, Mercury of 0.11, and Venus of 0.65. Charcoal is among the darkest substances, with an albedo of about 0.04), while pristine snow is among the brightest, with an albedo close to 1. From observations of the albedo of a planet or moon it is possible to make inferences about the nature of its atmosphere (if any) or surface.

An albedo feature is a marking on the surface of a celestial object in space which is significantly brighter or darker than its surroundings. As in the case of Syrtis Major on Mars, it need not necessarily correspond with an actual geological or topographical feature.