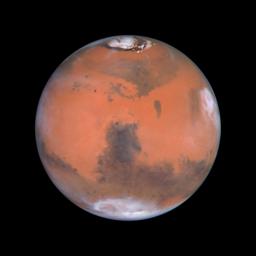 Bright streaks in the "wind shadows" of craters where dust that settles onto the surface of Syrtis Major is not as easily scoured away. Image: NASA/Mars Orbiter Laser Altimeter (MOLA) Team.

Syrtis Major, formerly known by various other names, including the Kaiser Sea, is one of the most conspicuous dark markings on the surface of Mars. It is centered near 290° W and 10° N, extends some 1,500 km (930 mi) north from the planet's equator, and spans 1,000 km (620 mi) from west to east. Its existence was first noted by Christiaan Huygens, who included it in a sketch he made in 1659; in fact, it was the first permanent feature to be seen on the surface of any planet.

Later observers noticed that Syrtis Major, and features surrounding it, were subject to seasonal changes, the nature of which was the cause of much speculation. Observations by space probes in the 1960s and '70s, led to the conclusion that the changes are due to lighter-colored windblown dust, partially and temporarily covering the darker underlying material now known to be basaltic rock.

In the picture to the right, taken by the Hubble Space Telescope, Syrtis Major is the prominent dark shape in the center. Below it, appearing white and oval, lies the giant impact basin Hellas.

There was a time when the dark regions on both the Moon and Mars were thought to be large bodies of water. Syrtis Major was originally called the Hourglass Sea. In Johann Mädler's map of the planet drawn in 1840 it became the Atlantic Canale, while in 1867 Richard Proctor christened it the Kaiser Sea in honor of Frederik Kaiser, an astronomer at the Leiden Observatory. Its current name is due to Giovanni Schiaparelli whose great map of Mars, based on observations made during the opposition of 1877, includes much of the martian nomenclature still used today. Syrtis Major And Syrtis Minor were the ancient names of two large gulfs on the north coast of Africa, now called respectively the gulf of Sidra and the gulf of Cabes or Gabes.


What is Syrtis Major?

Syrtis Major is in fact an immense, rather flat (low-relief), ancient shield volcano dating back to the so-called Hesperian epoch on Mars. It has much shallower slopes than those of the four spectacular volcanoes of Tharsis Montes, with a bulge that rises about 6 km (3.7 mi) and an overall drop in elevation of 4 km (2.5 mi) from Aeria in the west to Isidis Planitia in the east. The central depression, which is elongated in a north-south direction, contains the calderas Meroe Patera and Nili Patera, each of which is about 2 km deep.

Syrtis Major is dark (i.e., has a low albedo) because it is covered in ancient (basaltic) lava flows. These flows, based on data from the Mars Observer Laser Altimeter (MOLA), extend to a depth of 0.5–1 km. Variations is brightness are caused by wind blowing dust and sand across the area, notably in light-colored streaks that form downwind of craters. These streaks are accumulations of dust resulting from wind from the elevated rims of craters.