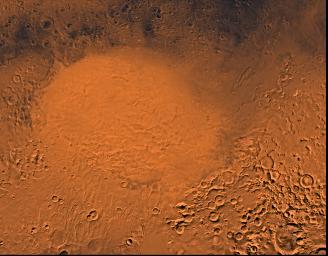 Hellas Planitia is the largest impact basin on Mars; it lies in the planet's southern highlands. Hellas Planitia – the roughly circular feature that dominates the image to the right – is about 2,300 km (1,430 mi) across, or half the size of the United States. It was formed by a giant impact during the late heavy bombardment period of the solar system, some 3.9 billion years ago. Hellas Planitia also contains the lowest elevation point on Mars, reaching about 9 km below the surrounding highlands.