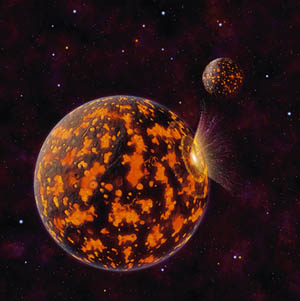 The late heavy bombardment was the period between about 4.0 and 3.8 billion years ago when the Moon and other objects in the Solar System were pounded most heavily by wayward asteroids. The evidence of this pummeling is clear to see in the maria basins on the Moon and in similar structures elsewhere, such as the Caloris Basin on Mercury and the great craters in the southern hemisphere of Mars. But, until recently, though the presumption has always been that our planet suffered in a similar way, there had been no direct evidence of this, since very few surviving surface rocks date back to this period, and in those that did, such as the Acasta formation, no signs of asteroid impacts had been found. Now this has changed. In 2002, British and Australian researchers announced they had found traces of an isotope of tungsten in 3.7-billion-year-old rocks from Greenland and Canada that can only be extraterrestrial.

Based on the visible impact history on other worlds, computer estimates suggest that during the 200-million-year period of the late heavy bombardment, Earth suffered over 22,000 impact craters larger than 20 km, about 40 impact basins larger than 1,000 km, and several continent-sized, 5,000-km basins. There would have been an impact that affected global conditions every century or so. Yet amid this cosmic blitzkrieg, life managed to get started on our world. In fact, it may be that impact-generated hydrothermal systems made excellent incubators for prebiotic chemistry and the early evolution of life, an idea that is consistent with other evidence that shows life may have originated in hot water systems around or slightly before 3.85 billion years ago.