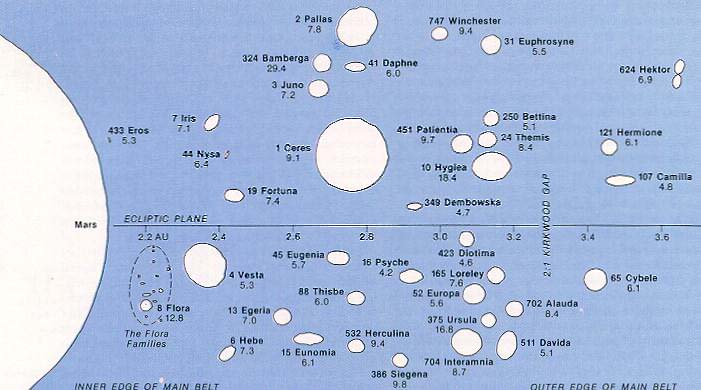 This representation of the physical properties of interesting asteroids includes most of the asteroids larger than about 200 km in diameter. They are shown in their correct relative sizes and shapes (the limb of Mars is shown for comparison). The bodies are positioned at their correct relative distances from the Sun. Asteroids located near the top or bottom of the diagram occupy relatively eccentric or inclined orbits (or both), while those shown near the ecliptic plane move in relatively circular, noninclined orbits. 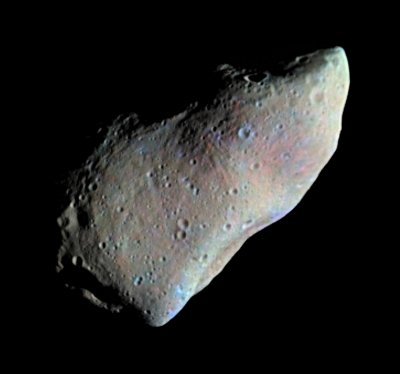 Asteroid Gaspra taken by NEAR-Shoemaker as it flew by. 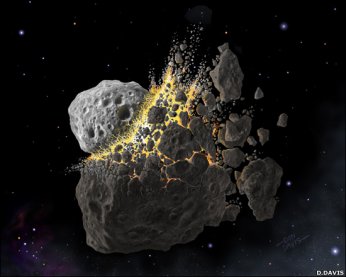 Artwork of a collision between asteroids.

An asteroid is a rocky or metallic object, generally smaller than a planet but bigger than a meteoroid, that orbits the Sun or another star. Asteroids are also called minor planets. What had been the largest asteroid, Ceres, has been classified as a dwarf planet.

More than 20,000 asteroids have been given official designations, most of them in the asteroid belt between the orbits of Mars and Jupiter. Asteroids outside this belt include the trojans, which share Jupiter's orbit, and the near-Earth asteroids. A number of different asteroid groups have been distinguished on the basis of their similar orbital characteristics. Other sub-planetary objects, considered distinct from asteroids, are centaurs, Kuiper Belt objects, and comets, though classification is ambiguous in some cases. Some of the smaller moons in the solar system appear to be captured asteroids, including the two moons of Mars, and a number of the outer moons of the four gas giants.

Asteroids range in size from a few meters to over 900 km across, and vary greatly in composition. Although none is visible to the naked eye, many can be seen at times with binoculars or small telescopes, including the four largest: 1 Ceres, 2 Pallas, 4 Vesta, and 10 Hygiea. Thirty known asteroids exceed 200 km in diameter and the census of asteroids larger than 100 km in diameter is believed to be virtually complete. In the 10 to 100 kilometer range, probably about half await discovery. However, of the estimated one million asteroids bigger than 1 kilometer across, only a tiny percentage is known. The total mass of all the asteroids, most of which is concentrated in the main belt, is about one-twentieth that of the Moon and about three times that of Ceres. Some asteroids, such as Ceres, Pallas, and Vesta, are nearly spherical; others, like 15 Eunomia (see Eunomia family), 107 Camilla, and 511 Davida, are quite elongated; still others, such as 4769 Castalia, 216 Kleopatra, and 4179 Toutatis, have bizarre shapes.

Several asteroids, including 243 Ida, 45 Eugenia, and 762 Pulcova, are known to have small moons of their own. The discovery of these moons is important because it enables an accurate determination of the parent asteroid's mass and average density. The density then gives a clue to the asteroid's makeup – either in terms of composition or of structure. There are also binary asteroids, such as 90 Antiope and, possibly, 1620 Geographos, in which two components of roughly equal size orbit each other at very close range. Several asteroids have been studied by passing space probes, including Ida and 951 Gaspra (by Galileo), and 253 Mathilde and 433 Eros (by NEAR-Shoemaker).

Most asteroids move in orbits that are somewhat more inclined and eccentric than those of the major planets (with the exception of Pluto) – the orbit of an average main-belt asteroid being inclined at about 10° to the plane of the ecliptic with an eccentricity of about 0.15. But some asteroids, such 3200 Phaethon and 944 Hidalgo, have highly inclined and/or elliptical paths, suggesting they may be defunct cometary nuclei. Rotational periods of asteroids range from 2.3 hours to 48 days, but in more than 80% of cases are 4 to 20 hours.

Albedos vary from just under 0.02 to over 0.5, with the majority of asteroids tending toward the lower (dark) end of this range. Low-albedo asteroids are generally found in the outer half of the asteroid belt, while higher-albedo objects tend to occupy the inner half. This fact stems from compositional differences, which in turn are related to how far from the Sun asteroids of different types formed.

Asteroids are thought to be the remnants of a stillborn planet. According to this idea, the newborn Jupiter gravitationally scattered nearby large planetesimals – accreting lumps of matter in the embryonic stage of planet-formation – some of which may have been as massive as Earth is today. Some of these big planetesimals strongly perturbed the orbits of the planetesimals in the region of the asteroid belt, raising their mutual velocities to the average 5 km/s seen today. As a result, what had been mild accretionary collisions in the future belt region became catastrophic disruptions. Only objects larger than about 500 km in diameter could have survived 5 km/s collisions with objects of comparable size. Ever since, the asteroids have been collisionally evolving so that, with the exception of the largest, most present-day asteroids are either remnants or fragments of past impacts.

While breaking down larger asteroids into smaller ones, collisions expose deeper layers of asteroidal material. If asteroids were compositionally homogeneous, this would have no noticeable result. Some of them, however, became differentiated; in other words, after they formed from primitive material in the solar nebula, they were heated (by radioactive decay or other means) to the point where their interiors melted and geochemical processes occurred. In some cases, temperatures became high enough for iron to form. Being denser than other materials, the iron sank to the center, forming an iron core and forcing basaltic lavas to the surface. At least one asteroid with a basaltic surface, Vesta, survives to this day. Other differentiated asteroids were disrupted by collisions that stripped away their crusts and mantles and exposed their iron cores. Still others may have had only their crusts partially stripped away, which exposed surfaces such as those visible today on the A-, E-, and R-class asteroids.

Collisions gave rise to the Hirayama families and at least some of the planet-crossing asteroids. Tiny fragments from the latter enter Earth's atmosphere to become sporadic meteors, while larger pieces survive passage through the atmosphere to end up as meteorites. The very largest produce craters such as the Barringer crater, and one may have been responsible for the extinction of the dinosaurs. Luckily, collisions of this sort are rare. According to current estimates, a few asteroids of 1-km diameter collide with Earth every 1 million years. Past collisions between asteroids and the Earth appear to have played a crucial role in the evolution of life on this planet (see cosmic collisions, biological effects). In particular, the impact of an asteroid about 65 million years ago caused a mass extinction in which the last of the dinosaurs were wiped out (see Cretaceous-Tertiary boundary).

The detection and tracking of near-Earth objects that might collide with the Earth in the future is receiving increasing attention. In addition, a number of space missions to investigate asteroids more closely, including the return of samples, have taken place or are underway. These include NEAR-Shoemaker, MUSES-C, and Deep Space 1.

Following its discovery, an asteroid is given a preliminary designation that consists of the year of discovery, an upper case letter to indicate the half-month in that year (A=Jan 1-15, B=Jan 16-31, ..., Y=Dec 16-31, the letter "I" being omitted), and a second upper case letter in sequence. When this sequence of 25 letters has been completed, it is repeated and followed by a sequential number. A permanent designation, consisting of a number and a name, is given to asteroids whose orbits have been accurately determined. The number represents the order of discovery, starting from 1 Ceres. The name is generally proposed by the discoverer and submitted to the International Astronomical Union for approval.

An asteroid type is any of a number of categories that an asteroid can be placed in based on its reflectance spectrum and albedo, which are indicators of surface composition. The distribution of the various typees throughout the asteroid belt is highly structured, suggesting that many asteroids formed at or near their present distances from the Sun and are representative of the composition of the solar nebula (not including hydrogen and helium) at these locations. Class S (siliceous) asteroids are more prevalent in the inner part of the main asteroid belt, giving way to Class C (carbonaceous) in the middle and outer parts of the belt. Together, these two types account for about 90% of the asteroid population. Class M (metal) objects are especially concentrated in the middle of the belt, while dark reddish asteroids of classes P and D become commoner at the outer edge of the belt and beyond.

The most widely used taxonomic scheme, proposed by American astronomer David Tholen and Italian astronomer Maria Barucci in 1989, identifies 14 different types – A, B, C, D, E, F, G, M, P, Q, R, S, T, and V. However, there is disagreement, on the one hand, about whether all of the Tholen-Barucci classes are distinct and, on the other, about whether additional categories are needed. To add to the confusion, because most meteorites are known to be fragments of asteroids, there is an on-going effort to match meteorite classification with asteroid classification. This is difficult because whereas meteorites can be analyzed in the lab to determine their exact chemical composition and petrologic type, most of the information about asteroids comes from remote spectroscopy.

An asteroid group is a collection of asteroids that move in generally similar orbits. Within a group there may be one or more families of asteroids whose orbital characteristics are so much alike that they almost certainly came from the breakup of a single parent body. Most groups and families (generally named after the first-discovered member) are found in or near the main asteroid belt. They include the Hungaria group, Flora family, Nysa-Polana family, Phocaea group, Koronis family, Eos family, Themis family, Cybele group, Alinda group, and Hilda group. The three largest families (Eos, Koronis, and Themis) have been determined to be compositionally homogeneous. If the asteroids belonging to them are considered to be fragments of a single parent body, then these parent bodies probably had diameters of 100 to 300 km. The smaller families have not been as well studied because they have fewer and smaller members; however, it is known that some of the smaller families are compositionally inhomogeneous and that, at least in some cases, what are observed are pieces of a geochemically differentiated parent body. Beyond the main belt are the Jupiter trojans, while inside the belt are the Mars-crossers and Mars trojans. Even closer to the Sun are three groups of near-Earth asteroids: the Amor group, Aten group, and the Apollo group.