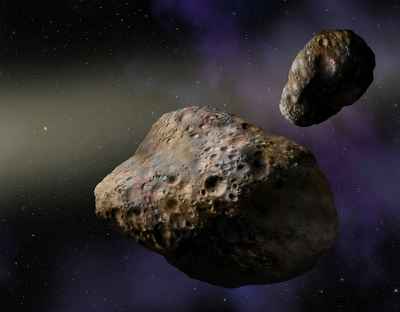 Artwork of the binary asteroid Patroclus.

A binary asteroid is an asteroid that consists of two roughly equal parts that revolve around each other at close range. Several examples are known including 90 Antiope, 617 Patroclus, and 762 Pulcova.

One way to explain such twinning is in terms of impacts that reduced the ancestral body to a collection of rubble. A subsequent glancing blow by another asteroid might then have spun the rubble-pile, causing it to fly apart into two equal-size piles that still orbited their center of mass. It has also been hypothesized that the nearly 10% of large craters on Earth that are doublets (e.g. Clearwater Lakes Craters) were formed by the impact of binary asteroids (see Earth impact craters). This suggests that there could be a substantial number of binaries among the near-Earth asteroid population, and, moreover, that Earth may be the cause of these binaries in the first place. A rubble-pile asteroid passing close to Earth could be pulled apart by the planet's tidal force, then, at a later time, collide with Earth and create two nearly equal impact craters.