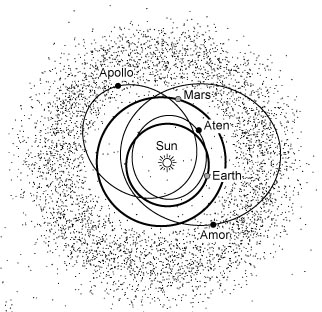 A near-Earth asteroid is an asteroid whose orbit occasionally brings it close to Earth. Most, if not all, such asteroids appear to have come from the asteroid belt and have been given new orbits through collisions with other asteroids or the gravitational influence of Jupiter. There are three main groups: the Aten group (which stays mainly inside Earth's orbit), the Apollo group (which crosses Earth's orbit), and the Amor group (which orbits mostly between Earth and Mars). Estimates suggest there are roughly 100 Atens, 700 Apollos, and 1,000 Amors with diameters greater than about one kilometer. Because these asteroids travel in orbits that cross or approach Earth's orbit, some of them can, occasionally, pass relatively close to our planet or even threaten to collide with it. Potentially hazardous asteroids are coming under increasing scrutiny.