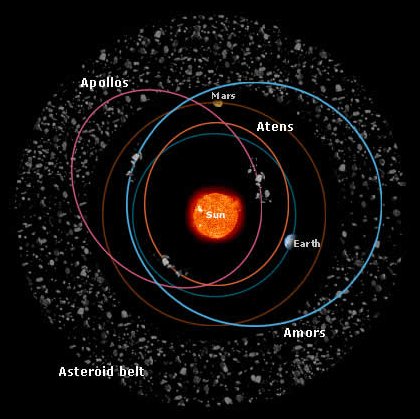 The Aten group is one of the three groups of near-Earth asteroids. The Atens have semi-major axes less than 1.0 AU and aphelia greater than 0.983 AU, so that they orbit mostly inside Earth's orbit. The prototype for the group, 2062 Aten, was discovered in 1976 by the American astronomer Eleanor Helin (1932–2009), has a diameter of less than 1 km, and is of type S.

Apoheles, whose orbits lie entirely within that of Earth, form a subgroup of the Atens.

2100 Ra-Shalom is the largest known of the Aten group of Earth-crossing asteroids. Discovered in 1978 by Eleanor Helin, it has a year shorter than Earth's.