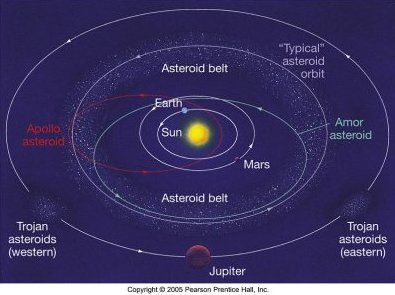 Orbt of a typical Amor asteroid shown together with those of the inner planets and the main asteroid belt.

The Amor group, also known as Earth-grazing asteroids, is one of three groups of near-Earth asteroids. The orbits of Amor asteroids have perihelia between 1.017 AU (Earth's aphelion distance) and 1.3 AU (Mars' perihelion distance), where 1 AU (astronomical unit) is the mean Earth-Sun distance. The prototype of the group is the one-kilometer-wide 1221 Amor, discovered in 1932 by Eugène Delaporte. The largest members are 1036 Ganymed, with a diameter of 40 km, and 433 Eros. About 1,500 Amors have been catalogued.

Amor asteroids vary widely in composition, which indicates they have come from different parts of the main asteroid belt and have been perturbed into their present orbits by either Jupiter or Mars. Close approaches to Earth and Mars can further alter their paths so that they temporarily become Earth-crossing Apollo group asteroids. About one in ten Amors will cross Earth's orbit in the course of a few hundred to a few thousand years.

2006 HZ51 is an Amor asteroid that is one of largest objects to appear on NASA/JPL's list of potentially hazardous asteroids (PHAs); it has a diameter of about 800 m. It is also the PHA that could strike Earth the soonest, though the probability of this happening is only about one is 6 million. The earliest of its 165 possible computed impact dates is June 21, 2008. While the chances of a collision are tiny, the discovery of so large an object with so small a lead time to its first possible impact date highlights the danger humanity still faces from this kind of threat. With so little advance warning, none of the measures suggested for deflecting a potentially hazardous asteroid would be able to be put into effect.

TYPES AND GROUPS OF ASTEROIDS