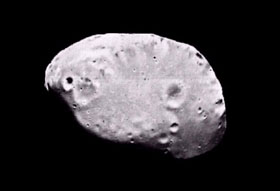 Deimos is the smaller of the two diminutive moons of Mars. In Greek mythology, Deimos was the son of Ares and Aphrodite. The name means "dread." Like its sister satellite Phobos, Deimos was discovered by the American astronomer Asaph Hall in 1877. Also like Phobos, it appears to be a C-type asteroid that was captured in the remote past by the martian gravitational field. However, it displays none of the grooves and crater chains found on Phobos, while many of its craters are less distinct, probably because of infilling by crater ejecta that may lie tens of meters thick on the surface. The larger craters, such as Voltaire and Swift, named after their literary connections (see Swift, Jonathan and the moons of Mars), measure only about 2 km across.