Jonathan Swift and the moons of Mars 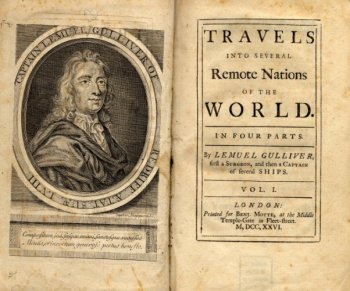 Jonathan Swift was an Irish clergyman and social and political commentator, best known for his satirical fantasy Gulliver's Travels, originally entitled Travels into Several Remote Nations of the World in Four Parts ... by Lemuel Gulliver (1726), in which reference is made to two (then undiscovered) moons of Mars. The astronomers on the flying island of Laputia, says Gulliver, have

... discovered two lesser stars, or satellites, which revolve around Mars, whereof the innermost is distant from the center of the primary exactly three of his diameters, and the outermost five: the former revolves in the space of ten hours, and the latter in twenty-one and a half.

When the two Martian moons, Phobos and Deimos, were eventually found, by Asaph Hall at the US Naval Observatory, their orbits proved to be quite similar to those described in Swift's novel. Phobos is actually 6,000 km from the surface of Mars and revolves around Mars in 7.7 hr, whereas Swift gave the values 13,600 km and 10 hours, respectively. Deimos averages 20,100 km from Mars and orbits in 30.3 hr; Swift gives 27,200 km and 21.5 hr, respectively.

Some cult literature has sprung up specifically to address how Swift could have "known" about the Martian moons and has arrived at some spectacular solutions, including the remarkable one that Swift himself was a Martian! In fact, the idea that Mars might have two satellites goes back to Johannes Kepler and a memoir he published in 1610 in which he misconstrued an anagram devised by Galileo in order to announce secretly a new discovery to his correspondents (who also included the Jesuit Fathers at the Collegio Romano). What Galileo had actually found were features connected with the planet Saturn which we now know to be its rings. His anagram was:

the correct solution of which was:

I have observed the most distant planet [Saturn] to have a triple form.

However, Kepler misconstrued the scrambled message to mean:

and assumed, therefore, that Galileo had discovered two Martian moons. Although the true meaning of the anagram became known half a century later, Kepler's mistranslation endured and, it seems, came down to Swift who may (although this is purely conjecture) have added some reasoning of his own. Since no Martian moons had been found by the early eighteeth century, then it would have been reasonable to assume that they must be very small, very close to the planet, or both. Whatever the case, Swift's fictional moons turned out to be surprisingly like their real counterparts. A more recent example of satellite prescience is Arthur C. Clarke's description of a solitary moon of Pluto in Rendezvous With Rama, made in advance of the discovery of Charon.