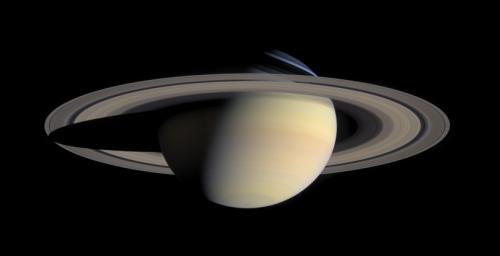 Saturn as seen by the approaching Cassini spacecraft. 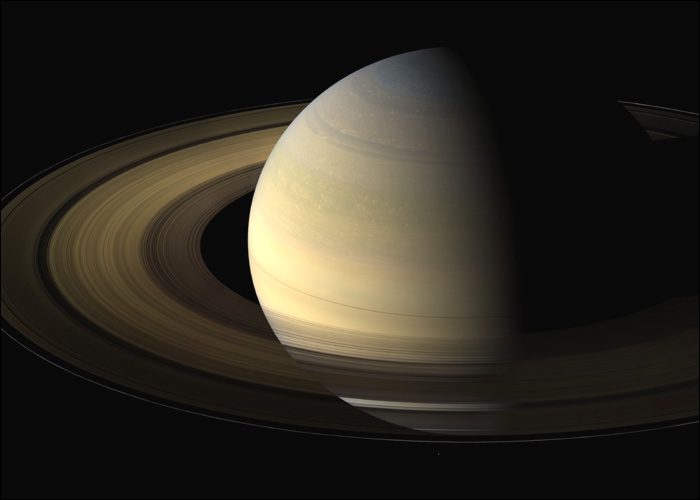 This mosaic of Saturn and its rings was taken close to equinox, when the Sun crosses the planet's equator. The images were captured on 12 August 2009 by the Cassini spacecraft. Source: NASA/JPL/Space Science Institute). 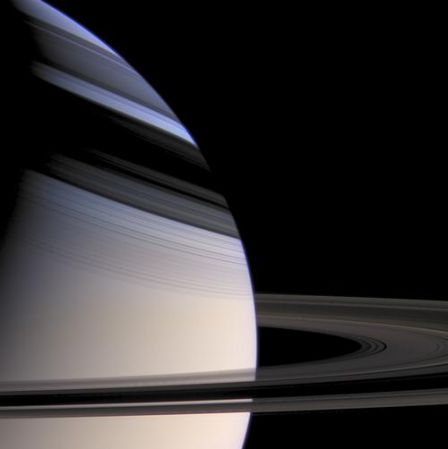 Saturn's rings and their shadow, imaged by the Cassini spacecraft. 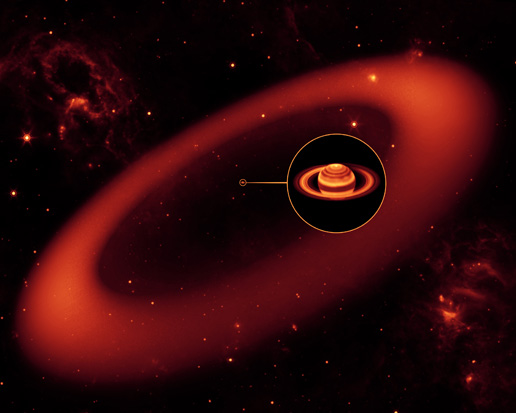 Artist's concept of the giant infrared ring around Saturn.

Saturn is the sixth planet from the Sun. It is a gas giant, second only in size to Jupiter with a diameter more than 9 times that of Earth. It has a spectacular system of rings and a large collection of moons. Saturn also has the most flattened shape of any of the major planets. Its average density is so low that if placed in a big enough tub of water, it would easily float.

Saturn is the most distant of the five planets known to ancient stargazers. At its brightest (magnitude -1.9), it outshines every star in the sky, including brilliant Sirius. In 1610, Galileo Galilei became the first astronomer to gaze at Saturn through a telescope. To his surprise, he saw a pair of objects on either side of the planet, which he later drew as "cup handles" attached to the planet on each side. In 1659, Christiaan Huygens announced that this was a ring encircling the planet. In 1675, Giovanni Cassini discovered a gap between what are now called the A and B rings.

Saturn's atmosphere consists of 96.3% hydrogen and 3.25% helium, with traces of methane, ammonia, ethane, ethylene, and phosphine. Because Saturn is colder than Jupiter, the more colorful chemicals sink lower in its atmosphere and can't seen. The result is markings that are much less dramatic than those on Jupiter, although bands and some small spots are still visible.

Alternate jet streams of east-west and west-east circulation, with speeds of up to about 1,800 km/h (1,100 mph), have been traced in the motion of the cloud tops and are responsible for the banded appearance of the planet. Electrical processes and heat from within Saturn enrich the layered chemical mixture of the atmosphere which probably transitions from superheated water near the core to ammonia ice at the observed cloud tops.

At Saturn's center is believed to lie a core of rocky material about the size of Earth, but more dense. Around this is a metallic hydrogen shell some 30,000 km deep, surmounted, in turn, by a region composed of liquid hydrogen and helium with a gaseous atmosphere some 1,000 km deep.

Saturn has a modest magnetic field similar in strength to Earth's. In 1997 the Hubble Space Telescope observed auroral displays caused by the interaction between the solar wind and the planetary magnetic field.

Saturn has the largest and most spectacular ring system in the Solar System. Composed of swarms of ice-rock particles ranging in size from a centimeter to several meters across (and possibly even as large as a kilometer), Saturn's rings are much brighter (with an albedo of up to 0.6) than any other known planetary rings. Though some 170,000 km wide (more if the tenuous outer portion of the E-ring is included), the rings are only about a km or so thick and have a total mass of about 0.01 that of the Moon. When Earth occasionally moves through the same angle as the rings, which are slanted at 27°, they almost completely disappear from view. The rest of the time, only the outer A-ring, the brighter B-ring and the bluish inner C-ring are clearly visible through telescopes on Earth, together with several dark gaps, including the Cassini Division and the Encke Division, in which ring material is much sparser.

Four additional faint rings together with a wealth of other complex and puzzling features were discovered or confirmed by the Voyager probes. Among these features are puzzling radial inhomogeneities called spokes, first reported by amateur astronomers, that may be an effect caused by Saturn's magnetic field. The F-ring, a narrow, wavy structure just outside the A ring, is confined by two small satellites and consists of at least five individual strands with embedded knots that may be clumps of ring material or mini moons. Voyager 1 images (but not those of Voyager 2) also showed the F ring to have strange braided appearance. Complex tidal resonances exist between a number of Saturn's moons and the ring system. Some of the moons – the so-called shepherd moons, Atlas, Pandora, and Prometheus – are important in keeping the rings in place; Mimas seems to be responsible for the paucity of material in the Cassini division; while Pandora is located inside the Encke Division.

In October 2009 the discovery was announced of a colossal new ring around Saturn. The ring only shows up in the infrared part of the spectrum and was found using NASA's Spitzer Space Telescope. The new ring, or belt, is so large that if it were visible in the night sky, it would span the width of two full Moons. The bulk of its material starts about 6 million km (3.7 million miles) away from the planet and extends outward roughly another 12 million km (7.4 million miles); its orbit is tilted 27° from the main ring plane. One of Saturn's farthest moons, Phoebe, circles within the ring, and is likely the source of its material.

The ring is tenuous, consisting of widely-dispersed particles of ice and dust. Spitzer's infrared eyes were able to spot the glow of the cool dust, which has a temperature of only about 80 K (–193°C, –316°F).

The discovery may help solve an age-old riddle of one of Saturn's moons. Iapetus has a strange appearance – one side is bright and the other is really dark, in a pattern that resembles the yin-yang symbol. Giovanni Cassini first spotted the moon in 1671, and years later figured out it has a dark side, now named Cassini Regio in his honor.

Saturn's supersized ring could explain how Cassini Regio came to be so dark. The ring is circling in the same direction as Phoebe, while Iapetus, the other rings and most of Saturn's moons are all going the opposite way. According to the scientists, some of the dark and dusty material from the outer ring moves inward toward Iapetus, slamming the icy moon like bugs on a windshield.