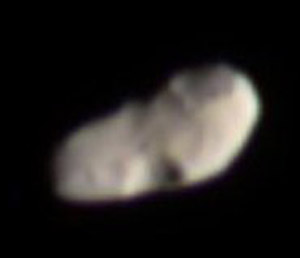 Calypso is a small moon of Saturn discovered in 1980 from ground-based observations. Calypso and Telesto are referred to as the Tethys trojans because they move in the same orbit as Tethys. Calypso trails the large moon by about 60° while Telesto leads it by the same angular separation.

Also known as Saturn XIV, Calypso was temporarily designated 1980 S25 before receiving its official permanent name, after Calypso of Greek mythology, in 1983.