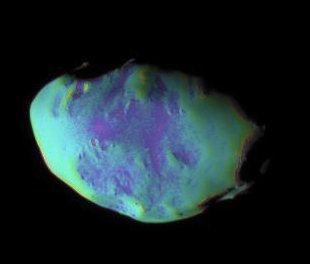 Telesto is a small moon of Saturn. It was discovered in 1980 from ground-based observations and is also known as Saturn XIII.

Telesto and Calypso are known as the Tethys trojans due to the fact that they share the same orbit as Tethys; Telesto moves about 60° ahead of the large moon and Calypso about 60° behind. Like the other inner moons, including Calypso, Epimetheus, Janus, Pandora, Prometheus, Atlas, and Pan, Telesto is probably a "rubble-pile" object rather than a solid icy moon.