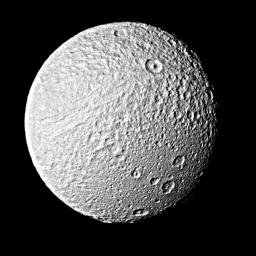 Voyager 2 photo of Tethys showing objects about 5 km (3 mi) in size. It was taken on August 26, 1981,from a range of 282,000 km (175,000 miles). A boundary between heavily cratered regions (top right) and more lightly cratered areas (bottom right) is similar to boundaries on the moons Dione and Rhea, indicating a period of internal activity early in Tethys' history that partially resurfaced the older terrain. The large crater in the upper right lies almost on the huge trench system that girdles nearly three-fourths of the circumference of the satellite. The trench itself is seen in this image as a linear set of markings to the lower left of the crater. The trench, several kilometers deep, is indicative of a cold, stiff ice crust at the time of its formation. Formation of this trench system could have resulted from the expansion of Tethys as its warm interior froze. 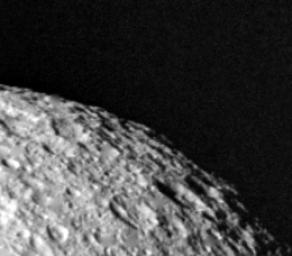 This is the highest-resolution view of Tethys obtained by Voyager 2 (Aug 26) when the spacecraft was 120,000 km (74,500 mi) from the moon. This image was taken 1× hr after the spacecraft passed through the planet's ring plane. The smallest features visible here are about 2.2 km (1.4 mi) across.

Tethys is the fifth largest moon of Saturn. It was discovered by Giovanni Cassini on March 21, 1684, and is also known as Saturn III.

Tethys appears to be composed primarily of water ice and is marked by a huge, globe-encircling canyon and numerous impact craters. The giant canyon, named Ithaca Chasma, is about 2,500 km (1,550 miles) long (three quarters of the circumference of the moon), and has an average width of about 65 km (40 miles) and a depth of 3 to 5 km (about 2 to 3 miles). If Tethys were once a ball of liquid water covered with a thin, solid crust, freezing of a thick, watery mantle would have produced enough surface expansion to account for the area of the trough. But it is unclear why all the expansion would have taken place in a single band rather than in widely distributed faults. Also prominent is a large crater, Odysseus, about 400 km (250 miles) across, or more than one third of the diameter of Tethys. A line drawn through the center of Odysseus would lie roughly at right-angles to Ithaca Chasma, suggesting a possible link between the two features. The temperature on the surface is -187 °C (-305 °F).