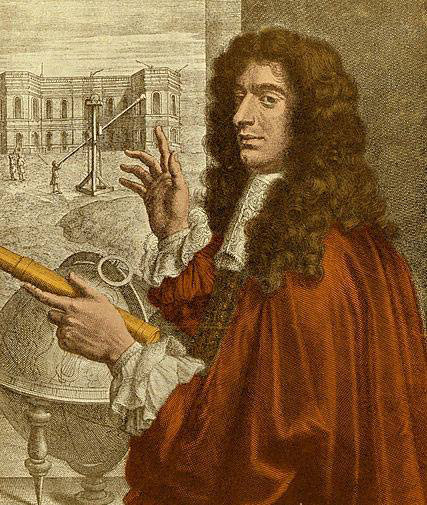 Giovanni Cassini was an Italian-born French-naturalized astronomer (known also by his Gallicized name, Jean Dominique) who discovered four of the moons of Saturn – Iapetus (1671), Rhea (1672), Tethys, and Dione (both 1684) – and the major division in its rings (1675), now named after him.

Cassini was born in Perinaldo, Italy, and already as a student showed great talent in mathematics and astronomy. He was trained in astronomy by two able astronomers, G. B. Riccioli and F. M. Grimaldi. Cassini became professor of Astronomy at the University Bologna (1650). Invited by the French King Louis XIV, to help in the design and construction of the forthcoming Observatoire de Paris, Cassini departed for France in 1669. Although his visit was originally intended to be of limited duration, Cassini enjoyed France to the point of accepting the directorship of the Observatory in 1671, and never returned to Italy. He changed his name to Jean Dominique, and became a French citizen in 1673. He died in Paris on September 14, 1712.

Cassini established his reputation in Italy by careful and accurate solar and planetary measurements, which allowed him to produce improved planetary tables, as well as improved versions of Galileo's tables for the moons of Jupiter, then of great interest because of their potential use for determining longitudes at sea. He was also involved in numerous engineering projects, including fortifications and hydraulics. While in Bologna, Cassini also measured the rotation periods of Mars and Jupiter, discovered one of the polar caps of Mars (1666), and established the distance to Mars (1672) by triangulation with the help of observations by Jean Richer. His refinement of the scale of the Solar System led to a value of the astronomical unit only 7% short of that accepted today. The improved tables he drew up for Jupiter's satellites were important in Ole Rømer's determination of the speed of light.

As director of the Observatoire de Paris, Cassini inaugurated, among other projects, a sustained solar observing program. Carried out primarily by the Jesuit Jean Picard (1620–1682), and later by Philippe de La Hire (1640–1718), this program included sunspot observations as well as measurements of the solar diameter. Cassini's own interests remained in geodesy and planetary astronomy; He carried out extensive observations of Earth's Moon, and between 1671 and 1684 he discovered four moons of Saturn (Iapetus, Rhea, Tethys, and Dione). In 1675 he also discovered the largest gap in Saturn's rings (now named the Cassini Division), and correctly speculated on the physical constitution of the rings as being a collection of small debris.

In 1672 Cassini effectively recomputed the size of Solar System from a determination of the martian parallax at opposition, from accurate measurements of Mars' position carried out simultaneously by himself in Paris and by fellow observer Jean Richer (1630–1696) in Cayenne, South America. Cassini's resulting value for the astronomical unit (Sun-Earth distance) was accurate to better than 90%, although the manner in which Cassini decided which of his multiple data to retain for the calculation, and which to throw out, has baffled science historians ever since.

Clearly an outstanding observer, Cassini was however quite conservative on physical theories; he resisted both the Copernican model of the Solar System, as well as the concept of a finite speed of light put forth by his collaborator Ole Römer (using Cassini's own data!). By 1710 Cassini had turned blind, and his younger son Jacques (1677–1756, aka "Cassini II") took over as director of the Observatoire de Paris, himself succeeded by his own son César-Francois (1714–1784, aka "Cassini III"), followed in turn by his own son Dominique (1748–1845, aka "Cassini IV"). The Observatoire de Paris thus remained under the leadership of the Cassini family for over 120 years, until Dominique resigned his position in 1793 for political reasons.