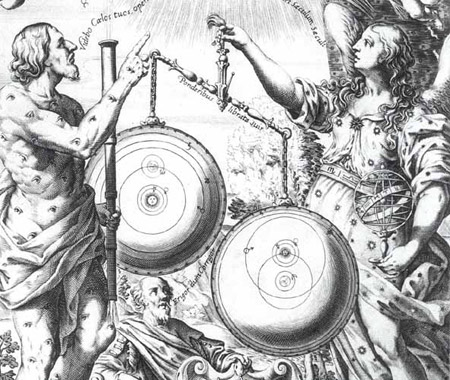 Giovanni Riccioli was an Italian astronomer best known for his Almagestum novum (New Almagest), published in 1651, in which he tries to remedy many defects of traditional astronomy while, at the same time, rejecting the new ideas of the Copernican system. His two-volume work includes a lunar atlas in which major craters are named after supporters of the Ptolemaic system, including Hipparchus, Brahe, and Ptolemy himself, and smaller craters after the revolutionaries, Copernicus and Aristarchus. The only contemporary map of the Moon of comparable quality was created by Johannes Hevelius, with whom Riccioli profoundly disagreed over the question of lunar water and life. Above his map, Riccioli declared, "No Man Dwell on the Moon."

Riccioli was the first to observe (1650) a double star (two stars so close together that they appear to be one) – Mizar in Ursa Major, the middle star in the handle of the Big Dipper (or Plough). He also discovered satellite shadows on Jupiter.