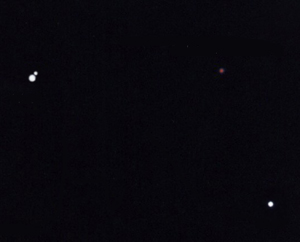 Mizar (Zeta Ursae Majoris) is the fourth brightest star in the constellation Ursa Major and the middle star in the handle of the Big Dipper. It forms a well known naked-eye double with fourth magnitude Alcor (80 Ursae Majoris), 0.2° to the northeast (Fig 1).

Mizar is also famous as the first known true binary, in which a pair of stars that orbit each other, were seen telescopically, by Giovanni Riccoli in 1650. The components, Mizar A and B, lie 14" apart (at least 500 astronomical units) and take some 5,000 years to complete one mutual circuit.

Spectroscopic observations reveal that each of these components is itself a binary. Mizar A was the first spectroscopic binary to be discovered, in 1889. It consists of a very bright pair separated by just 0.008", with an orbital period of 20.5 days. Subsequently, Mizar B was also found to be a spectroscopic binary; Mizar B's dimmer stars make a round trip of each other every sixth months. All four stars are main-sequence A stars (the brighter both A2 with masses of 2.5 solar masses each, the fainter, both about A6 with masses of 1.6 solar masses).

In 1996, the Navy Prototype Optical Interferometer (NPOI), near Flagstaff, Arizona, was used to compile images of Mizar A that, for the first time, showed it as two separate stars (Fig 2). The NPOI data revealed that the components of Mizar A come as close together as 16 million km and as far apart as 54 million km.

The Mizar quartet moves through space at a similar speed and direction to Alcor, but measurements by the Hipparcos satellite suggest that Mizar and Alcor are separated by 2 to 3 light-years – too far for the systems to be physically associated.