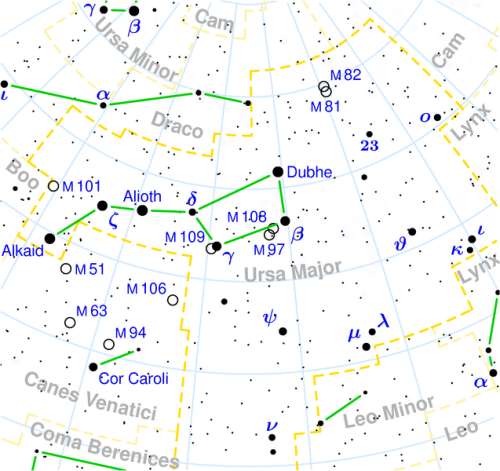 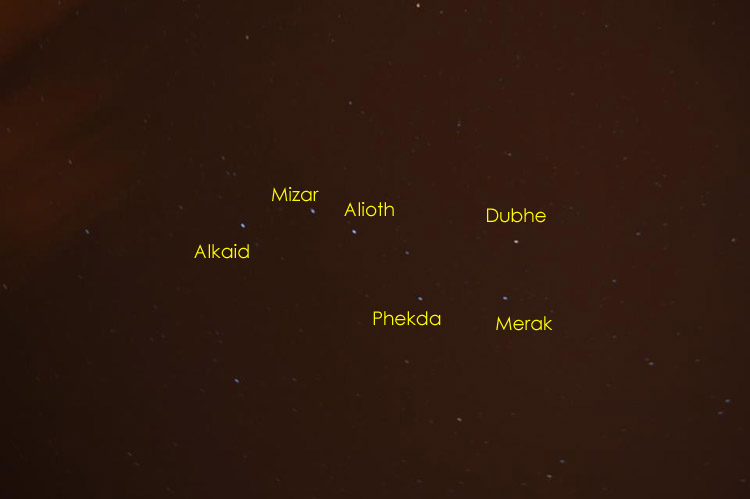 Fig 2. Ursa Major, with the stars of the Big Dipper (Plough) labeled.

Fig 3. The stars in the Big Dipper seem to the casual observer to be the same distance from Earth; there is no three-dimensional effect. In fact the stars in any particular constellation are not necessarily associated. The diagram shows the relative distances of the seven main stars in Ursa Major; Alkaid (210 light-years) is easily the most remote. Mizar, lying next to it in the sky, is only 88 light-years away.

Ursa Major is well-known in most world cultures and associated with a number of myths. It was one of the constellations catalogued by the Greek astronomer Ptolemy in the 2nd century. In Greek mythology, it is associated with Callisto, a nymph who was turned into a bear by Zeus' jealous wife Hera.

Ursa Major is a good starting point to find other stars and constellations in the sky. A line through the Pointers, Alpha Ursae Majoris (Dubhe) and Beta UMa (Merak), leads north to the pole star, Polaris, and south toward Regulus. Capella in Auriga can be found by following a line from Delta UMa to Alpha UMa. Likewise, a line from Delta UMa to Beta UMa and beyond, leads to Alpha Gem.

Ursa Major contains the famous asterism known as the Big Dipper (or, in Britain, the Plough), which is made from the stars Alpha, Beta, Gamma, Delta, Epsilon, Zeta and Eta UMa (Fig 2 and 3). The five middle stars are all moving through space together as part of a loosely-bound group known as the Ursa Major Moving Cluster. Alkaid (Eta, leftmost star in diagram below) and Dubhe (Alpha), however, are moving in their own directions, ultimately dooming the Dipper's shape.

SU Ursae Majoris (SU UMa) is the prototype SU Ursae Majoris star. It is located,inear the tip of the nose of the Great Bear, about 3 degrees northwest of Omicron UMa. The unusual variability of SU UMa was first noted in 1908 by the Russian astronomer L. Ceraski. SU UMa shows normal U Geminorum-type outbursts every 11–17 days and super-outbursts every 153–260 days; its range is from magnitude 15 at minimum to a peak magnitude of 10.8 at super-outburst. Since the defining features of SU UMa stars are a narrow outburst, a super-outburst, and a super-hump, it is strange that for a period of nearly three years in the early 1980s the prototype itself did not exhibit such behavior. Thus, it was questioned whether this variable even belonged to the category named after it! Another absence of super-outburst activity happened between April 1990 and July 1991.

The Ursa Major Moving Cluster is a loose group of stars, widely scattered about the sky, with similar space velocities (about 14 km/s in the direction of eastern Sagittarius). It includes five of the seven major members of the Big Dipper – Merak (Beta), Phad (Gamma), Megrez (Delta), Alioth (Epsilon), and Mizar (Zeta) – as well as Alphekka (Alpha Coronae Borealis) and Sirius (Alpha Canis Majoris). With its center located about 75 light-years from us, about half the distance of the Hyades, it is the nearest star cluster to the Sun. Its proximity and size (some 30 light-years long by 18 light-years wide) mean that it covers an enormous portion of the sky.