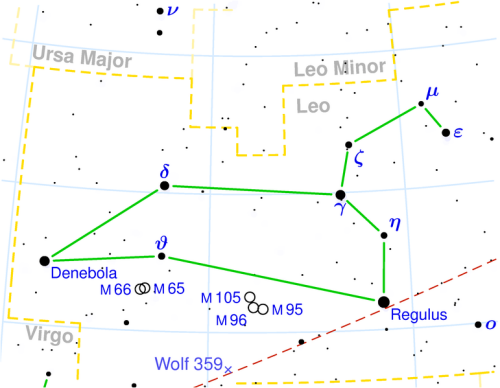 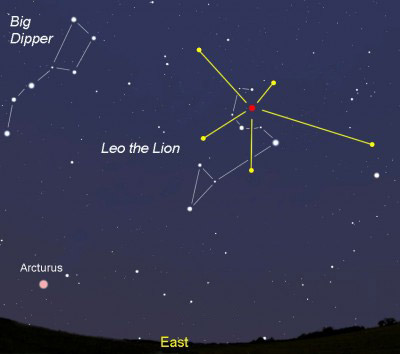 Fig 2. The radiant (shown in red) of the Leonid meteor shower. 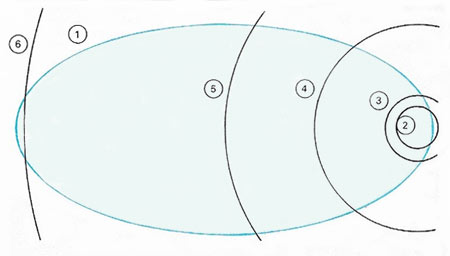 Fig 3. The orbit of the Leonid meteor stream (1) intersects the orbits of Earth (2), Mars (3), Jupiter (4), Saturn (5) and Uranus (6). Because the meteors are not distributed evenly, major meteor showers appear only occasionally. The average interval was once just over 33 years, but the expected showers of 1899 and 1933 were missed because the shower orbit had suffered planetary perturbations.

Leo, the Lion, is a large, prominent constellation, the fifth of the zodiac, which dominates the northern spring sky. It lies between Virgo and Cancer and to the south of Leo Minor and Ursa Major; the Sickle asterism, formed by the stars Alpha (Regulus), Eta, Gamma (Algieba), Zeta (Adhafera), Mu, and Epsilon Leo, outlines the Lion's head (Fig 1). See below for details of the constellation's brightest stars and interesting deep sky objects.

Leo I is also the name of a dwarf spheroidal (dE3) galaxy that, at a distance of about 880,000 light-years, is the most remote satellite galaxy of the Milky Way and hence also a member of the Local Group. Discovered in 1950, it has a diameter of about 6,000 light-years. Because it lies close to Regulus in the sky (making study of it difficult in the bright star's light) it is sometimes known as the Regulus Dwarf, and also catalogued as DDO 74, UGC 5470, and Harrington-Wilson 1.

Leo II is a large collection of galaxy groups clustered about 30 million light-years to one side of the Virgo Cluster.

Leo II is also the name of a dwarf spheroidal (dE0) galaxy that, at a distance of about 800,000 light-years, is a remote satellite galaxy of the Milky Way (the second furthest, after Leo I) and hence also a member of the Local Group. Discovered in 1950, it has a diameter of about 4,200 light-years. Also known as Leo B, it is catalogued variously as DDO 93, UGC 6253, and Harrington-Wilson 2.

Leo III is a dwarf irregular galaxy that lies at a distance of 2.25 million light-years and is a member of the Local Group. Also known as Leo A, it is catalogued as DDO 69 and UGC 5364, it was discovered in 1942 by Fritz Zwicky.

Copeland's Septet (Hickson 57) is a close grouping of seven major galaxies that lies about 480 million light-years away, about 8° NW of Denebola. It was discovered by Ralph Copeland (1837–1905) in 1874 while he was employed as an observer under Lord Rosse. Copeland probably first observed the group while using the 72-in "Leviathan of Parsonstown" at Birr Castle.

The Leonids is an annual meteor shower that reaches its maximum on November 17–18 and has its radiant point in Leo, near the center of the Sickle asterism (Fig 2 and 3). The shower provides modest displays in most years but spectacular meteor storms every 33 years; rates of 60,000 meteors per hour were recorded in 1966.

The Leonids are fast-moving meteors, entering Earth's atmosphere at about 250,000 km/h, and leave many trains. Their parent body is the comet Tempel-Tuttle.


Bright stars and other interesting objects in Leo