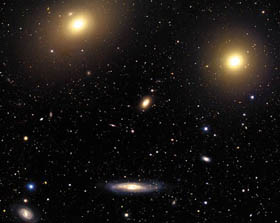 The Virgo Cluster is the nearest large cluster of galaxies and the gravitational heart of the Local Supercluster. It lies in the constellations Virgo and Coma Berenices, is centered about 50 million light-years away, and contains about 2,500 galaxies, about 150 of which are large.

The Virgo Cluster completely dominates our small corner of the universe, and our entire Local Group of galaxies is being gravitationally drawn toward this huge concentration of matter (an effect known as the Virgo infall). At its core lie three supergiant ellipticals, M84, M86, and M87, which probably formed from the merger of many smaller galaxies.

Recent observations have shown that the Cluster's principal axis is aligned with an immense filament that is part of the large-scale structure of the universe. The major axis orientations of Virgo's brightest elliptical galaxies, as well as M87's jet, also appear to fall in line with this filament, which can also be traced to even larger distances, where it eventually intersects with the rich cluster Abell 1367 some 160 million light-years away. Abell 1367 itself forms one node of a well-known supercluster with the Coma Cluster, raising the intriguing possibility that the Virgo, Abell 1367, and Coma clusters may all be members of a colossal filamentary network.