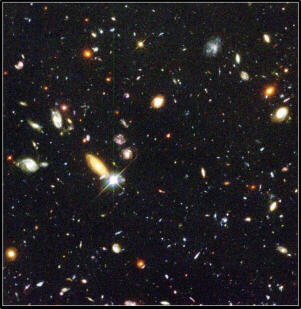 A cluster of galaxies is a collection of galaxies, containing a few to a few thousand members, which may or may not be held together by its own gravity. Our Local Group is a smallish, loose cluster of 40 or so galaxies, a few million light-years across. At the other end of the scale are rich clusters of galaxies, such as the Virgo Cluster and Coma Cluster, which contain hundreds or thousands of systems in a volume of space comparable to that of a loose group. Relatively nearby rich clusters were first systematically cataloged by George Abell and are now known as Abell clusters.

Among the methods used to describe galaxy clusters are the Bautz and Morgan classification and the Rood-Sastry classification. Between the galaxies within clusters is a super-hot, super-dilute gruel of X-ray emitting gas known as the intra-cluster medium.

The Bautz-Morgan classification is a system for classifying clusters of galaxies based on morphology. It recognizes three main types. Type I has a single supergiant cD galaxy, type III (for example, the Virgo Cluster) has no members significantly brighter than the general bright population, and type II (for example, the Coma Cluster) is intermediate between the other two.