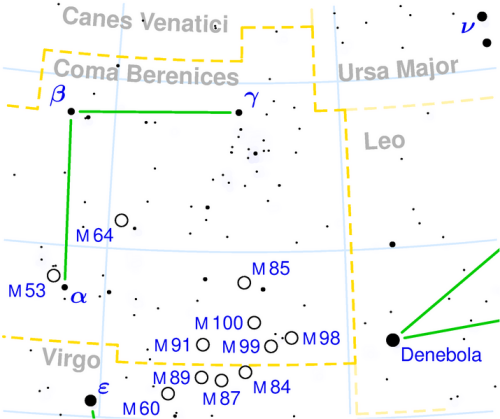 Coma Berenices (abbreviation: Com) is a very faint northern constellation considered to be part of Leo by the Greeks but made separate by Gerardus Mercator in 1551. It lies between Canes Venatici to the north, Virgo to the south, Leo to the west, and Bootes to the east, and contains the north galactic pole.

Although devoid of bright stars, Coma Berenices abounds in galaxies and other deep sky objects, details of some of which are given below.

The Coma Star Cluster (Melotte 111) is a large, conspicuous open cluster of roughly 100 stars, some as bright as fifth magnitude, arranged in a roughly triangular shape. It lies in Coma Berenices, below Gamma Com, and shows up well with binoculars.

The Coma Cluster is the nearest massive cluster of galaxies, also known as Abell 1656; it is roughly spherical, about 20 million light-years in diameter, contains more than 3,000 galaxies, and lies about 280 million light-years away in Coma Berenices. Its location close to the north galactic pole makes it ideally placed for observation free from the effects of galactic obscuration.

As is usual for clusters of this richness, the largest member galaxies are overwhelmingly elliptical or lenticular, with only a few spirals (most of these probably near the outskirts of the cluster). The central region is dominated by two giant galaxies: NGC 4889 (an elliptical) and NGC 4874 (an S0 type). The Coma Cluster contains hot intra-cluster gas that is an extended source of X-rays, about 0.5° across, known as Coma X-1.