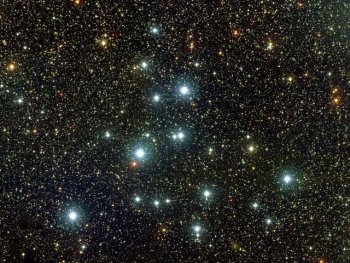 The open cluster M39 in Cygnus. It lies about 800 light-years away and contains stars that are only about 300 million yr old. Image: WIYN telescope, Kitt Peak. 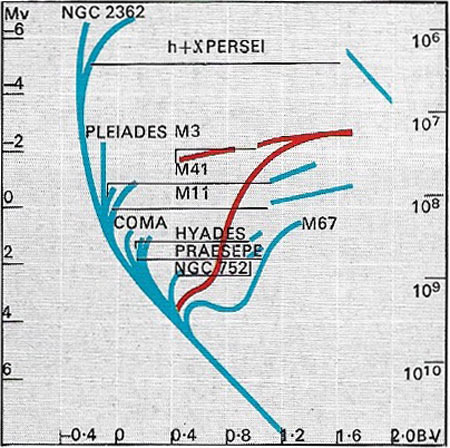 The color-magnitude graph of open clusters shows absolute magnitude Mv against color index (B-V = photographic magnitude minus visual magnitude). The age (years) is given on the right-hand scale..

An open cluster is a loose aggregation of dozens or hundreds of young stars, in a volume of space typically less than 50 light-years across. Open clusters are only weakly held together by gravity and are fated to disperse over a period, typically, of several hundred million years. Some much older open clusters are known, however. For example, M67 in Cancer, which lies about 2,800 light-years away, is at least 4 billion years old but is located well away from the galactic plane and as a result is less liable to disruption.

An older name for these groupings is galactic clusters because they are found mostly in the disk, and especially the spiral arms, of this and other disk galaxies.