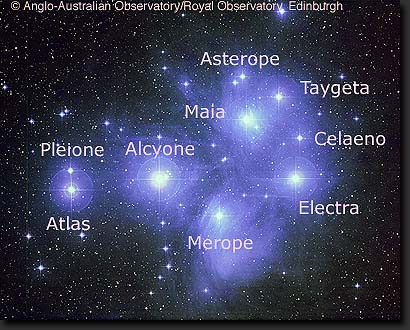 The Pleiades (M45, NGC 1432) is a nearby, fairly loose open cluster of about 500 stars in the constellation Taurus. It is also known as the Seven Sisters, although with the unaided eye most people can see only six stars, all of them bright blue-white B or Be stars: Alcyone, Atlas, Electra, Maia, Merope, and Taygeta (Pleione is the seventh brightest).

The Pleiades spans almost 2 degrees of the sky, making it about four times wider than the full Moon. The Trumpler classification for the Pleiades is II,3,r (Trumpler, according to Kenneth Glyn Jones) or I,3,r,n (Götz and Sky Catalog 2000); that is, the cluster appears detached and strong to moderately concentrated toward its center, the stars exhibit a wide range of brightness, and it is rich (having more than 100 members). The central part of the cluster is spherical in form, with a core radius of slightly over 4.5 light-years, however the outer part is markedly elliptical, with an ellipticity of 0.17.


white dwarfs and brown dwarfs in the Pleiades

Cecilia Payne-Gaposchkin observed that the Pleiades contains several white dwarfs, which leads to a problem in stellar evolution. How can white dwarfs exist in such a young star cluster? As they are numerous, it's highly probable that the stars are original cluster members and not field stars that have been captured. Stellar evolutionary theory insists that the upper mass limit for white dwarfs – the so-called Chandrasekhar limit – is about 1.4 solar masses. Yet, stars with such a low mass evolve so slowly that it takes billions of years to attain that final state, not the mere 100 million-year age of the Pleiades cluster.

A possible explanation may be that these white dwarfs were formerly very massive and therefore evolved rapidly. Effects such as strong stellar winds, mass loss to close neighbors, and/or rapid rotation subsequently caused them to lose a high proportion part of their mass in planetary nebulae. Thus the residual stars – previously the stars' cores – have come below the Chandrasekhar limit, forming the observed stable white dwarfs.

Brown dwarfs have also been observed in the Pleiades. They may account for a quarter of the stellar population of the cluster, although only about 2% of its mass.


nebulosity in the Pleiades

The Pleiades is currently moving through a great dusty cloud of interstellar matter, the dust grains of which are reflecting the light of the cluster's blue stars. This cloud is not, as sometimes supposed, a remnant of the nebula from which the cluster formed, as evidenced by the fact that the nebula and cluster have different radial velocities – crossing each other with a relative velocity of 11 km/s. Though not visible to the eye, long photographic exposures show this reflection nebula enmeshing the whole crowd. The nebula is particularly bright around Merope (see Merope Nebula).