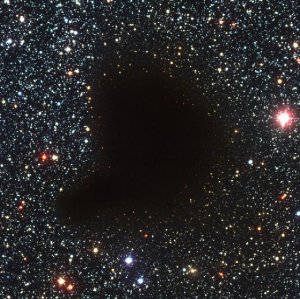 The dark cloud Barnard 68 absorbs all background starlight because of the amount of interstellar dust it contains. Credit: ESO. 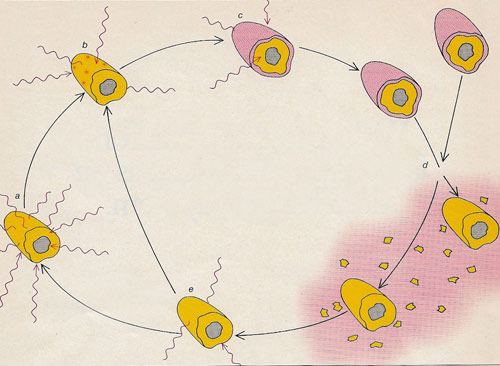 Life cycle of interstellar grains takes them from a diffuse cloud to a dense cloud and then, if they don't become part of a newborn star, to a diffuse cloud again. In a diffuse cloud the grains start out as silicate particles. They are shown with a mantle of yellow stuff preserved from a previous cycle (a). The cloud grows denser, and the grains accrete, at an increasing rate, a layer of ices (b, c). Eventually the cloud is dense enough for its gaseous matter to assume a molecular form. Ultraviolet irradiation gives rise to radicals in the icy mantle of the grains; then occasional collisions among the grains heat the mantle sufficiently for the radicals to recombine in large numbers releasing energy. In some cases the mantle explodes, repopulating the gaseous phase of the cloud (d). In the densest parts of the cloud stars form by the gravitational collapse of gas and dust. The heat of the newborn stars evaporates the icy grain mantle. What remains is yellow stuff (e). The grain may repeat the cycle within a molecular cloud. Alternately, the cloud may disperse; either the new stars blow it away or an entire complex of clouds and stars moves out of a spiral arm of the galaxy. Thus the cycle is closed. The arrival of an occasional ultraviolet quantum continues the slow, cool, chemical reworking of the yellow stuff in the mantle of the grain.

Grains of different clouds appear to have different layers, depending on the stage of their life cycle. Grains in a diffuse cloud have only a silicate core and a yellow-stuff mantle (a). Grains in a molecular cloud have a silicate core, a yellow-stuff mantle, and an additional mantle consisting of icy condensates reworked by ultraviolet irradiation (b). Grains in a cloud so dense that stars are about to form have an even more complex pattern (c). A rapid accretion of matter has given them an outermost mantle of ices not reworked by irradiation. There has simply not been time. The polarization of the light that passes through interstellar clouds suggests that interstellar grains with mantles are elongated particles rather than spherical ones. When such particles are aligned, they act weakly as a polarizing filter.

Structure of grains when they initially accrete is inferred from laboratory simulations in which mixtures of water, methane, ammonia, and other simple molecules are subjected to ultraviolet irradiation at a temperature of 10 degrees K. Each grain begins as a silicate core that condensed in the atmosphere of cool red giant. Around this core mantle of ices forms. Ultraviolet radiation breaks some of the mantle molecules into radicals, or reactive molecular fragments (a). The radicals can then recombine in new ways (B,). Over a longer period the continued ultraviolet irradiation of the grain can give rise to ever more complex mixtures of molecules and radicals (c).

Cosmic dust is microscopic grains of matter that occur in space. These grains play an important role in the origin of planetary systems (see planetary systems, formation) and possibly even that of life itself. The composition, size, and other properties of cosmic dust particles vary from one location to another. Grains in dense interstellar clouds, for example, are larger than those in the general interstellar medium, while larger particles still are found in circumstellar dust disks.

Most of the dust in interstellar space comes from stars that have moved off the main sequence and entered the red giant phase of their evolution (see stars, evolution). These stars have extended atmospheres rich in silicon, oxygen, and carbon – elements that were manufactured in the stellar core but that have been dredged to the surface by convection currents. Depending on its life history, a red giant may have surface layers that are rich in either carbon or oxygen. A carbon star gives rise to a dense pall of carbon particles, in the form of graphite flakes or amorphous lumps, each measuring about 0.01 microns across. In the case of an oxygen-rich star, the oxygen atoms react with silicon and any metal atoms in the star's atmosphere to form silicate grains, roughly 1 micron across. As the grains are blown away from the star by radiation pressure and their temperature falls, they begin acquiring additional atoms of hydrogen, oxygen, carbon, nitrogen, and sulfur, which have also escaped from the parent star. These accreted materials build up into icy mantles of water ice and solid ammonia, methane, and carbon dioxide. Through a variety of chemical "sticking" processes, other substances may then be added to the mantle ices, including small molecules such as carbon monoxide (CO) and hydrogen sulfide (H2S). Bombardment by ultraviolet radiation from local hot stars, or more remote stars, triggers reactions between the different chemical species on a grain's surface and leads to the formation of simple organic substances interstellar chemistry.

Dust grains that have drifted into the general interstellar medium find their way into denser clouds and, eventually, into molecular clouds where the density is sufficiently high for more complex organic synthesis to take place (see interstellar molecules). How far up the scale of prebiotic synthesis such interstellar cookery can lead has yet to be determined, but it certainly extends as far as the simplest of amino acids. According to Fred Hoyle and Chandra Wickramasinghe, it extends as far as life itself, with the largest of dust grains being none other than living bacteria. Although this extreme theory has few supporters, mainstream science has gradually come around to the view that organically-laced debris from space may have been an important means by which life was able to originate so early on Earth (see Earth, early conditions).


Effects of interstellar dust on light

Interstellar dust particles strongly absorb, scatter, and polarize visible light at wavelengths comparable to their size, reemitting the light in the far-infrared region of the spectrum. The amount of visual interstellar extinction is wavelength-dependent and leads to both a dimming and a reddening of starlight, as blue wavelengths tend to be scattered the most. Views along the plane of the Milky Way are severely limited by the dust that congregates there.

Elliptical galaxies have less dust than our galaxy (but are not dust-free), while some galaxies are experiencing such tremendous episodes of star formation that the dust in them converts nearly all the visible light into infrared, resulting in an ultra-luminous infrared galaxy.